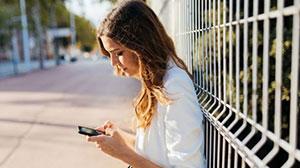 Kerri Sackville
A funny thing happens when you become single after a relationship. Men come out of the woodwork. Men from your past, or men only remotely connected with your present. Men who fancy their chances with you now that you’re unencumbered by that pesky partner.

They might be an ex, or someone you flirted briefly with back in the day, or someone who has always liked you from afar. Or they may be someone else’s husband, who is so excited by the idea of you being single that they forget they are married themselves.
Men who have been buried in your past are suddenly exhumed. They contact you, proposing coffee, or a drink, mere days – or even hours – after learning you are available.
It happened to Claire*.
“Gary, a friend of a friend, called me two days after my husband and I split. He said he heard I was single, and wanted to throw his hat in the ring. I was really flattered; it felt good to be wanted again after so long. I was less flattered when I discovered that he was still ‘technically’ married. I said no. And not just ‘technically’.”
And then there was Erin:
“There was an ex-boyfriend from twenty years ago who saw on Facebook when I reverted to my maiden name. He started messaging me, and reminiscing about the old days, and asked me out for a drink. I wrote, “I’m not sure how your wife would feel about that,” and he got all defensive. No way was I going there!”
Now, I have long noticed that men who leave relationships generally have someone else lined up. I suspect these married men are trying to secure a new girlfriend before they consider leaving their wives. Or perhaps they are trying to secure a new girlfriend but have no intention to leave at all. Either way, I’ve heard enough stories to fail to be surprised.
Happily, however, not all men who come out of the woodwork are unavailable. Stella told me about an old friend who contacted her after her divorce who was perfectly ready for a relationship.
“Apparently, he had always liked me, and when he found out I was single he asked me out. The reality was that we weren’t a good match. Still, at least we got to find out, rather than seeing each other as the ones who got away.”
Some men seem to have a sixth sense about when a woman is available, even if it’s only temporary. When her boyfriend went away to Europe, my friend Jessica received not one but two calls from men she dated years ago.
“It’s like they can smell the fact that Darren is away,” she told me. Needless to say, she kicked them to the curb.
There are endless stories about ex boyfriends making contact, months, and sometimes years, down the track. Some have genuine regrets about the end of the relationship, and want to make amends. Some miss the sex, and hope to have another round. Some see pics on social media, and their curiosity is piqued.
Some are just lonely or sad, and turn to an ex-girlfriend for comfort or intimacy.
And some – many – are highly manipulative and controlling, and just want to know they can click their fingers, and get her back.
There are times when ex-partners can reunite and live happily ever after. (I was reunited with my childhood sweetheart after six years, and stayed married to him for 17 years.) There are times when old friends can catch up, and ignite a spark.
But most of the time, there is a reason why exes are exes, and why men who never were partners, never should be. Exhumation rarely ends in a relationship. If a man long buried in your past pops up, it’s generally best just to push him back down.