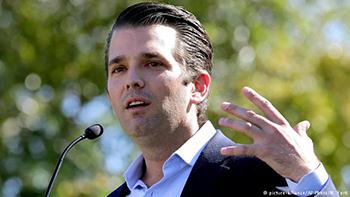 The New York Times reports Donald Trump Jr. was told in an email about Moscow’s effort to aid his father’s presidential bid. The 39-year-old is the latest in the Trump entourage to be implicated in the Russia affair.
Citing three people with knowledge of the email, The New York Times on Tuesday said US President Donald Trump’s eldest son was informed that Russia sought to support the billionaire’s candidacy in last November’s election.

The Times said the email was sent by British publicist Rob Goldstone who helped broker a meeting between a Russian lawyer and Trump Jr. The lawyer claimed to have potentially explosive information about Democratic presidential candidate Hillary Clinton.
Donald Trump Jr. was informed in the email that the Russian government was the source of the revelations about the former US Secretary of State, the paper said.
The email disclosure was the third Times report that named Trump Jr. as potentially linked to a scandal over whether Moscow sought to influence the US election.
Claims dismissed
Earlier Monday, the 39-year-old took to Twitter to defend earlier newspaper claims about the secret meeting with Russian lawyer Natalaia Veslnitskaya, which he denounced as a “big yawn.”
“Obviously I’m the first person on a campaign to ever take a meeting to hear info about an opponent… went nowhere but had to listen,” he added.
The Times said Paul Manafort, Trump’s campaign chairman during his camapign and the president’s son-in-law, Jared Kushner, also attended the meeting.
Despite hitting back at the claims, Trump Jr on Monday hired New York criminal defense lawyer Alan Futerfas to represent him.
Before the email’s existence was revealed, Futerfas defended his new client to the Reuters news agency, saying that “quite frankly, there is nothing to all of the media buzz about the June 9th, 2016 meeting. That will be proven to be the case.”
Three Trump officials attended
The newspaper’s disclosure makes Trump’s eldest son the latest member of the president’s entourage to become embroiled in a worsening scandal over possible links with Russian officials in the lead up to last November’s election.
Among several tactics being investigated, Congressional committees and special counsel Robert Mueller are trying to uncover whether Moscow ordered several cyber attacks and an “influence campaign” to weaken Clinton’s chances of winning the White House.
Comey: No doubt Russia interfered with US election
Trump’s National Security Advisor Mike Flynn, Attorney General Jeff Sessions, Trump’s son-in-law and senior advisor Jared Kushner, and former campaign chairman Paul Manafort have so far been implicated in the probe.
Trump Jr. faces questions
Later on Monday, both Republican and Democrat members of a Senate Intelligence Committee investigating the scandal said they wanted to interview Trump Jr.
“Trump officials keep conveniently forgetting about meetings with Russians, only to recant after being confronted with evidence to the contrary,” Virginia Senator Mark Warner and vice chairman of the committee tweeted.
Meanwhile, White House spokeswoman Sarah Sanders said there was nothing inappropriate about the meeting with lawyer Veselnitskaya.
“Don Junior took a very short meeting from which there was absolutely no follow-up,” she told reporters.
The Kremlin has denied it knew lawyer Veselnitskaya’s identity, despite her reportedly having claimed she had links to top Russian officials.
mm/gsw (AFP, AP, dpa, Reuters)