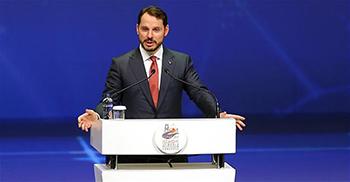 Speaking at the presidential session at the 22nd World Petroleum Congress, of which state-run Anadolu Agency is the global communication partner, Albayrak said the country’s current daily natural gas transmission system has a capacity of 190 million cubic meters.

Albayrak also stated that Turkey, with its increased storage capacity of 11 bcm per annum by 2023, promises to be one of the biggest in the region.

He stressed that Turkey is focusing on strengthening its energy security and domestic energy resources.
“Thus, we focus on our seismic explorations both in the Mediterranean and the Black Sea region. We aim to reveal the gas and oil potential of these seas and want this potential to contribute to the region,” Albayrak said.

Turkey’s first seismic vessel, the Barbaros Hayrettin Paşa, has been conducting operations in the Mediterranean since April 2017, while a second vessel, the MTA Oruç Reis, will soon be ready for exploration.

The 22nd World Petroleum Congress (WPC), the largest meeting of the oil and gas industry, started in Istanbul on July 9.

High-level executives from leading energy companies and up to 50 energy ministers plan to attend the congress, under the theme “Bridges to our Energy Future.”