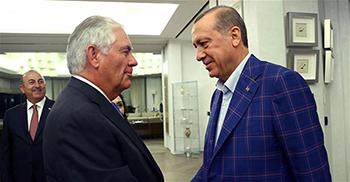 Turkey and the U.S. are beginning to rebuild trust and could come to an agreement about northern Syria, U.S. Secretary of State Rex Tillerson has said, Bloomberg reported on July 10.

The remarks came a day after Tillerson’s lengthy meetings with Turkish President Recep Tayyip Erdoğan and Foreign Minister Mevlüt Çavuşoğlu late on July 9 in Istanbul, where he was attending an oil conference.

“I think we’re beginning to rebuild some of the trust that we lost in one another. They lost our trust to a certain extent and we lost theirs,” Tillerson told staff at the U.S. General Consulate in Istanbul.

“We’re making some progress down in Syria. We’re hopeful that we can replicate that with Turkey on some areas in the north part of Syria,” he added.

Turkey and the U.S. have long been at odds over the latter’s decision to ally with the Syrian Kurdish People’s Protection Units (YPG) and to provide weapons to it in the fight against the Islamic State of Iraq and the Levant (ISIL). Turkey considers the YPG to be a terror organization due to its links with the Kurdistan Workers’ Party (PKK).

Ankara has blasted Washington over its support for the YPG, accusing it of partnering with a terror organization at the expense of ruining its relationship with its long-standing NATO ally.

Tillerson said he hoped for an improvement in ties between the two allies, after six hours of meetings with President Erdoğan on three different occasions.

“Our relationship here in Turkey, which has been under some stress for some time, I hope we are beginning to put it on the mend,” he told the consular staff.

“This is an extraordinarily important relationship to the United States for many, many reasons, from a security standpoint to future economic opportunities, and the important geography that the citizens of Turkey occupy at this crossroads of the world,” Tillerson added.

“I know we’re not back to full normalization yet but we’re working on it,” he added, thanking consular staff for operating in what he called a “challenging” post.

“I also want to thank our Turkish nationals who I know in particular are operating under some very difficult conditions as this relationship has been strained,” he said.