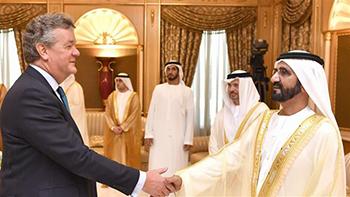 British newspaper editor Francis Matthew has been charged with murdering his wife with a hammer in Dubai, the United Arab Emirates.
Matthew, 60, editor of the Dubai-based Gulf News newspaper, was arrested after he called police last week to his home in an upscale neighborhood in Dubai where the body of his wife, Jane Matthew, 62, was found, The Independent reported on Tuesday.

According to Dubai authorities, Matthew admitted throwing a hammer at her but said he did not intend to “kill her.” The couple married in 1985.
Matthew has been a well-known reporter and commentator in the Persian Gulf since he arrived there back in the 1980s. He was editor of the newspaper from 1995 to 2005.
Jane Matthew was found dead at her home in Jumeirah, an upmarket residential area on Dubai’s seafront that is popular with expats.
The Dubai Media Office issued a statement, saying the journalist had been charged with murder and that investigations were underway.
The statement said Matthew had confessed “to killing his wife because of marital issues.”
“Dubai Police received a call on Tuesday from the defendant claiming that his wife was assaulted by burglars at their house in Jumeirah, Dubai,” the media office said.
“Initial reports showed that death resulted from a strong blow on the head with a hard object, which raised suspicion about the husband,” it added.
“Suspect confessed during public prosecution’s interrogation that he assaulted his wife and threw hammer at her without intending to kill her,” it noted.
The staff of the English-language daily said they were “shocked and saddened” at the tragedy.