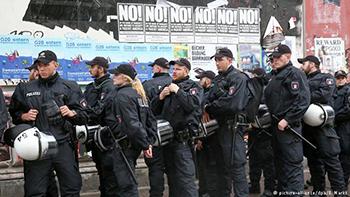 A series of violent riots that engulfed the city of Hamburg during the G20 summit have provoked a wave of indignation among German politicians who demanded a radical change of approach toward violent protests, as well as to left-wing extremism.
“Germany’s image in the international community has been severely damaged due to the incidents in Hamburg,” German Foreign Minister Sigmar Gabriel told Bild’s weekend edition following three nights of violent clashes between the left-wing radicals and police in the German northern port city that hosted the G20 summit.

“All alleged political motives for this orgy of violence are full of deceit and should just serve as a disguise for the real motive of the offenders that [came] from all parts of Europe: violence in itself,” Gabriel added.
The minister also demanded the creation of an EU-wide special investigative committee that would launch an inquiry against all those involved in the violent riots in Hamburg.
“A state governed by the rule of law must now demonstrate an ability to defend itself,” he said.
German Justice Minister Heiko Maas also spoke about the necessity of an EU-wide response to outbreaks of left-wing extremism. He particularly demanded the establishment of the European information databank on extremists as well as more intensive exchange of data on extremists committing violent crimes.
“We have faced a new form of violence, to which we should respond with enhanced cooperation in fighting extremists,” Maas told the German media on Monday in Berlin. He also vowed to employ a tougher approach toward violent extremists’ supporters.
“Those, who support rampant violence will also have to stand trial,” he said, as cited by the Der Tagesspiegel daily.
In the meantime, German Interior Minister Thomas de Maiziere compared the left-wing rioters in Hamburg to far-right extremists and even Islamists. “Those were not demonstrators. Those were violent and felonious radicals,” the minister said during a press conference on Monday, adding that those who staged violent riots in Hamburg were “despicable, violent extremists just like neo-Nazis and Islamist terrorists.”
He also partly echoed Gabriel’s words by saying that they have no right to use any political motives to justify their actions and expressed his hope that the German courts would pass “tough sentences” upon them.
He went on to say that summits similar to the G20 would continue to be hosted in major German cities, despite any threats of violence from various extremists. “Any other approach would be a capitulation of the law-bound state,” the minister added.
Left-wing extremism ‘downplayed’ in Germany for years
In the meantime, many politicians focused specifically on the flaws of the existing approach towards left-wing extremism and violence in Germany by saying that this problem has long been neglected by the authorities.
The head of the Free Democratic Party (FDP), Christian Lindner, demanded left-wing extremists’ activities be “much more closely monitored” by the German domestic security service, the BfV, which is usually tasked with dealing with terrorist activities or far-right extremists.
A member of the presidium of the German Chancellor Angela Merkel’s Christian Democratic Union (CDU) party, Jens Spahn, told Bild on Sunday that “the extent of left-wing extremism in Germany has been downplayed for years.”
If those were neo-Nazis who reduced Hamburg to “wreckage and ashes,” the public indignation would be rightfully big, he said, adding that “the left-wing fascists with their hatred and violence need just the same clear response.”
The politician also went further, accusing the Social Democrats, Greens and Left parties of deliberately downplaying the left-wing violence and “closing their eyes” to it.
His words were echoed by CDU Secretary General Peter Tauber, who told Bild that “nobody would come to the idea of just tolerating far-right extremist centers” while, “in case of the left-wing extremist centers such as Rigaer Strasse in Berlin or the Rote Flora in Hamburg, people are often too reserved.”
“That must change,” Tauber added.
His words were echoed by Stephan Mayer, an MP from the CDU’s ally, the Bavarian Christian Social Union (CSU) party, who said that the city authorities in Berlin and Hamburg “should no longer tolerate squatting by left-wing extremists and lawless zones in Rigaer Strasse and the Rote Flora.”
Both places were squatted by left-wing groups after being abandoned years ago.
Similar ideas were expressed by the head of the Federal Chancellor’s Office, Peter Altmaier, who said that the closure of the left-wing extremists’ centers would be a “test” for Germany.
“We should not tolerate any lawless zones,” he said, adding that the left-wing extremists consistently spread the idea that “damage to property is not that bad.” He went on to say that tolerating such ideas is a “grave mistake.”
In his Twitter post, Altmaier also compared what he called “repulsive extreme terror” in Hamburg to terror from right-wing extremists and Islamists. He also thanked Hamburg police for its efforts aimed at containing the rioters.
Some 500 security officials injured in Hamburg riots – Interior Minister
Almost 500 security officials, including 180 federal police officers, have been injured in the incidents in Hamburg, de Maiziere said during the press conference on Monday. He added that “only two officers now remain in hospital,” although many more security officials still have not fully recovered.
In the meantime, the head of operations for the Hamburg police, Hartmut Dudde, put the number of injured officers from various police departments at 476 at a separate press conference. Dudde’s estimate was also confirmed by the head of the Hamburg police, Ralf Martin Meyer.
Angela Merkel visited Hamburg’s police officers following the series of violent riots during the G20 summit and thanked them for their work.
She also condemned the violence in her speech at the summit.
“I sharply condemn the rampant violence and unrestrained brutality the police was facing over and over again during the G20 summit,” she said at that time, adding that “there is not the slightest justification for looting, arson and brutal attacks.”
The riots continued for several nights in a row during the week of the G20 summit in Hamburg. Piles of debris, burned-out barricades, smashed shops and shattered glass transformed Hamburg into a scene resembling a battlefield by Saturday, June 8.
Some 186 demonstrators were arrested as a result of the riots, AFP reported, citing Dudde. The official number of the protesters injured in the clashes has not been provided.