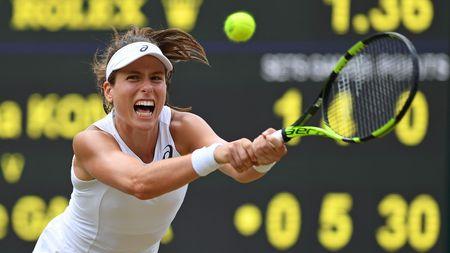 By Chris Bevan-BBC Sport at Wimbledon
Johanna Konta will aim to become Britain’s first Wimbledon women’s semi-finalist since Virginia Wade in 1978 when she faces Simona Halep on Tuesday.

Konta’s quarter-final against Romanian second seed Halep, who will become the world number one if she progresses, is the third match on Centre Court.
Wade, the 1977 champion, has backed Konta to end the 40-year wait for a British woman to win the title.
But sixth seed Konta said: “My next battle is all I have got my mind on.”
The 26-year-old added: “It’s humbling that I have such champions thinking so highly of me. That’s something that’s very complimentary towards me.
“But there’s a lot of work to be done between now and me being in a position to be playing for the Wimbledon title.
“I haven’t really looked that far forward. I’m unable to because I am playing an incredibly tough opponent, who is playing very well right now.”
Konta and Halep must wait to start their tie because Novak Djokovic’s fourth-round match against Adrian Mannarino, held over from Monday, is first on Centre Court at 12:00 BST.
Halep, who beat former world number one Victoria Azarenka in round four, is searching for her first major title after losing in the French Open final last month.
If Konta wins, 25-year-old Karolina Pliskova of the Czech Republic will move to top spot despite her second-round exit at Wimbledon. Current world number one Angelique Kerber of Germany was beaten by Spaniard Garbine Muguruza in the last 16.
Taking it match by match
Konta was born to Hungarian parents in Australia and moved to Eastbourne, England in 2005 when she was 14. She became a UK citizen in 2012 and began representing Great Britain.
She reached her first Grand Slam semi-final at the Australian Open in January 2016 and won her first WTA title in Stanford six months later.
The biggest triumph of Konta’s career came at the Miami Open in April 2017 but, before this year, she had only won one match at Wimbledon in five previous visits.
Jo Durie was the last British woman to reach the last eight of the tournament in 1984.
“Johanna does not have the experience of Wimbledon finals so for her it is important to take it match by match,” Konta’s coach, Wim Fissette, told BBC Sport.
“She has the pressure and the expectation, but the most important thing is that she can just play her game as good as she can.
“In the women’s game there aren’t that many players with a great serve and I think Johanna is in the top three for sure. Even her second serve is a big weapon.
“Johanna is a great athlete she has really big shots from the baseline.”
Konta ‘controlling her emotion in a positive way’
Monday’s 7-6 (7-3) 4-6 6-4 victory over Caroline Garcia was the second of Konta’s four wins so far in SW19 to have come in three sets.
Fissette says her mental strength has played a big part in her run this year and feels it is an aspect of her game which is still improving.
“She gets better every week,” he told BBC Sport. “It is only her second full year on the WTA tour and she still has to learn a lot, but I feel she’s doing that so well.
“It was her first time being in a big final in Miami and she played a great match. It looked easy but it was not and she is handling that very well.
“In Wimbledon it is the same and she has never done better than second round and expectations are of course high this year.
“But so far she is controlling her emotion in a very positive way and I think it is a result of the mental hard work of the past.
“The first time I saw Johanna play was in 2015 when she had to play Victoria Azarenka and she was unknown but she showed me this attitude that ‘I am Johanna Konta and I am very confident in my game and myself and give myself a big chance to beat you here today’.
“I was really impressed by her mentality and she is still doing that and I think that is what a big champion does.”
Konta’s most recent meeting with Halep was a one-sided affair. The second seed won easily on Romanian clay in a Fed Cup weekend dominated by home captain Ilie Nastase.
This was just weeks after Konta had come from behind to win their Miami quarter-final, a result that led Halep’s coach Darren Cahill, distinctly unimpressed with her on-court attitude, to put the partnership on hold.
She won him back with her approach over Fed Cup weekend and the chapter would have had a perfect ending had Jelena Ostapenko not sprung a surprise in the French Open final.
Halep is in form and has adjusted to the grass very well. But the same can be said of Konta, who proved her nerve again in the fourth round as she pipped Caroline Garcia to the post.
Venus set to play 100th Wimbledon match
There is only one former champion in the women’s quarter-finals – five-time winner Venus Williams.
Williams, who is seeded 11th, plays 20-year-old French Open champion Jelena Ostapenko in the first women’s quarter-final on Centre Court, after Djokovic plays Mannarino.
It will be the 37-year-old’s 100th Wimbledon match since she made her debut here in 1997, but she says she is not thinking about the landmark.
“You will have to ask me what it feels like when I’m retired,” Williams said. “For now, it’s all about focusing on the best performance possible on Tuesday.”
On Court One, Spain’s Garbine Muguruza, the 2015 Wimbledon runner-up, plays seventh seed Svetlana Kuznetsova, at 13:00 BST.
That match is followed by Magdalena Rybarikova, the 28-year-old Slovakian world number 87, who is the lowest ranked player left, against 24th seed Coco Vandeweghe of the United States.