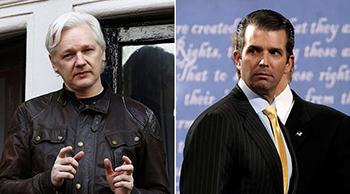 WikiLeaks founder Julian Assange tweeted he advised Donald Trump Jr to release the email chain related to his meeting with a Russian lawyer before the story hit the media.
The New York Times had been reporting on the meeting between Trump Jr and Russian lawyer Natalia Veselnitskaya for a few days, and had contacted Trump Jr for a statement on the content of the emails it had obtained. Trump Jr released his email chain along with a statement Tuesday, which was seemingly a pre-emptive action to minimise the upcoming Times story.

According to Assange, he made contact with Trump Jr on Tuesday morning and advised him to release the emails to WikiLeaks. “Two hours later, does it himself,” Assange said.
“I argued that his enemies have it — so why not the public? His enemies will just milk isolated phrases for weeks or months with their own context, spin it according to their own strategic timetable,” Assange explained. “Better to be transparent and have the full context but it would have been safer for us to publish it anonymously sourced.”
“By publishing it himself it is easier to submit as evidence,” Assange added. “He’s surely had advice and/or is confident on the facts. I’d argue that even the completely innocent need WikiLeaks.”
CNN journalist Brian Stelter tweeted a NYT source said it was “preparing to publish” the email story and Trump Jr’s people “asked for more time” and then “pre-empted” the NYT by publishing the emails.
The emails between Trump Jr and publicist Rob Goldstone about meeting with a Russian lawyer were sent in June 2016. Trump’s son was told a Russian government lawyer had documents that would “incriminate” Hillary Clinton.
Trump Jr, along with “Paul Manafort (campaign boss)” and his “brother-in-law,” Jared Kushner, met with Veselnitskaya on June 9.
“I was asked to have a meeting by an acquaintance I knew from the 2013 Miss Universe pageant with an individual who I was told might have information helpful to the campaign. I was not told her name prior to the meeting. I asked Jared and Paul to attend, but told them nothing of the substance,” Trump Jr said Monday.
The woman claimed that “she had information that individuals connected to Russia were funding the Democratic National Committee and supporting Ms. Clinton,” Trump Jr said.
However, he added that “her statements were vague, ambiguous and made no sense. No details or supporting information was provided or even offered. It quickly became clear that she had no meaningful information. She then changed subjects and began discussing the adoption of Russian children and mentioned the Magnitsky Act. It became clear to me that this was the true agenda all along and that the claims of potentially helpful information were a pretext for the meeting.”