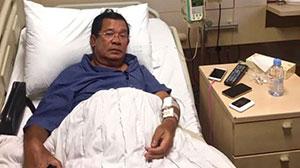 Bangkok: Cambodian Prime Minister Hun Sen has cancelled his attendance at official events and remained out of the country for days, prompting speculation he is receiving medical treatment in Singapore.

But the strongman who has ruled for more than three decades hit back on Facebook posting photos of himself with his family and friends at what appeared to be a Singapore mall.

“Do I have the right to be happy in gathering children and grandchildren in these pictures or not?,” he said, adding that regardless of his location, he could run the country “especially cracking down on the chaos caused by a group of gangsters, extremists and national traitors”.

In May the 64-year-old announced on Facebook he had been hospitalised in Singapore to treat “extreme exhaustion”.

“Thank you compatriots who sent messages wishing me well and worrying about my health,” he posted alongside a photo of himself looking vulnerable in a hospital bed that raised fresh questions about who would take over if he resigned, fell ill or died.

“Do not expect Hun Sen to die,” he bellowed days later before a group of wealthy fundraisers.

Mr Hun Sen’s cancelling of his attendance at official events since the start of July prompted rumours to circulate about this health among the political elite in Phnom Penh.

Three consecutive Council of Ministers meetings have been postponed since June 23 and another scheduled for this Friday has been shelved, according to a council statement reported by the Phnom Penh Post.

Rumours first surfaced in 2010 that Mr Hun Sen, then a heavy smoker, had lung cancer but they were strongly dismissed at the time. Further questions about his health were raised in 2014.

The Post reported on Tuesday that Chham Chhany – a social media personality who in 2016 angered the Prime Minister’s eldest son, Hun Manet, after accusing him of having ties to illegal logging – claimed in a Facebook post that Mr Hun Sen had left for Singapore on July 1 for health reasons.

Citing an anonymous source, Mr Chham Chhany said Mr Hun Sen had not made Interior Minister Sar Kheng or Deputy Prime Minister Bin Chhin acting prime minister, as is customary in his absence “because he does not trust them”.

Council of Ministers’ spokesman Phay Siphan confirmed Mr Hun Sen was not in the country but said he had “no idea” if he had left for treatment.

One of the photos posted this week on Mr Hun Sen’s Facebook page showed him eating in what appeared to be a Singapore restaurant with Land Management Minister Chea Sophara, senior military commander Kun Kim, business tycoon Kith Meng and his middle son, Hun Manit, among others.

Mr Hun Sen, a former commander of the murderous Khmer Rouge who briefly defected to Vietnam in the 1970s before being appointed one of the world’s youngest leaders, has remained in power for decades through use of violence, control of security forces and the courts, and massive corruption.

For months his administration has been cracking down on opposition figures and non-government organisations, even warning that war would break out if voters shunned his ruling Cambodian People’s Party.

Succession planning is sensitive in Cambodia and could expose generational gaps in the ruling party.

Mr Hun Manet is an army lieutenant who heads the Defence Ministry’s counter-terrorism department and is commander of his father’s several thousand-strong bodyguard unit.