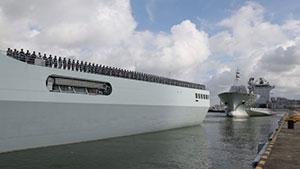 Beijing: China has sent members of its People’s Liberation Army to the African nation of Djibouti to man its first overseas military base.
The move on Tuesday is a key part of a wide-ranging expansion of the role of the Asian giant’s armed forces.

The Defence Ministry said on its website that a ceremony was held at a naval pier in the southern Chinese port of Zhanjiang.
It said the personnel would travel by navy ship to the Horn of Africa nation but gave no details on numbers or units.
The outpost, in the tiny former French colony bordering Ethiopia, Somalia and Eritrea, is also the United States’ only military base on the continent, used as a launching pad for its counter-terrorism operations in the region.
China said its base will house a logistics centre that will support anti-piracy, UN peacekeeping and humanitarian relief missions in Africa and western Asia.
It would also aid military co-operation and joint exercises as the PLA navy and other services seek to expand their global reach in step with China’s growing economic and political footprint.
Djibouti is already home to the centre of American operations in Africa, while France, Britain, Japan and other nations also maintain a military presence in the small but strategically located nation.
China has frequently cited its longstanding policy against emulating the US in building overseas military installations as evidence of its peaceful rise and lack of expansionist intentions.
But under President Xi Jinping, China has refocused the military’s ambitions beyond its traditional role of protecting domestic borders, overseeing a rapid expansion of both geographic reach and technical capability to help safeguard its increasingly global economic interests, while backing up its more assertive stance on territorial claims in the East and South China seas.
Chian already has major infrastructure works including ports and railways in Africa as part of its One Belt, One Road project.
AP, Fairfax Media