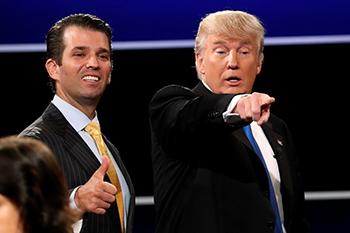 Even if the foreign power involved were the Brits and not the Russians, meeting with another government to get opposition dirt for a U.S. presidential election is wrong.
Donald Trump Jr. gives a thumbs up beside his father Donald Trump. Mike Segar / Reuters
Line by ugly line, Donald J. Trump Jr.’s emails with British-born former tabloid reporter and Russian intermediary Rob Goldstone are now plastered on The New York Times website. They reveal an astounding set of communications. Goldstone promises incriminating information about Hillary Clinton that could be used in the campaign—with the Kremlin’s backing. Junior’s response should have been to speed dial the FBI. Instead, he writes three little words with big, big consequences: “I love it.”

It’s quite a turn for the First Son. Just a few months ago, The New York Times gave him a fawning spread replete with woodsy photos. Now his association with dirt doesn’t look quite so good.
1) The key word in The New York Times piece is “flurry.” There isn’t one email exchange. There are many. Trump Jr.’s email “dump” will not be the end of the story. Instead, as Churchill once said, it’s just the end of the beginning. Investigators and journalists will be following the email trail.
2) Even the emails released so far paint a damning portrait. The “we didn’t know better, we’re just amateurs” defense with respect to foreign policy—which the White House has been using to this point—will not hold up. Campaign chairman Paul Manafort attended the now-infamous June 9, 2016 meeting with Kremlin-connected lawyer Natalia Veselnitskaya. Manafort is no neophyte in this world. He has worked on multiple Republican presidential campaigns over decades. What’s more, the red line, whether it’s a legal or political one, is: “Thou shalt not work with foreign powers to gain advantage in a U.S. election.” As former FBI director Jim Comey would put it, there is no fuzz on this whatsoever. Even if the foreign power involved were the Brits and not the Russians, meeting with a foreign government to get opposition dirt for a U.S. presidential election is wrong and probably illegal.
3) It is telling that every new piece of hard information major newspapers have reported recently about the Russian meddling in the 2016 election—every single one—supports the Intelligence Community’s conclusions about it. In January, the Office of the Director of National Intelligence released the community’s assessment that “Russian president Vladimir Putin ordered an influence campaign in 2016 aimed at the U.S. presidential election,” and that he and his government “aspired to help president-elect Trump’s election chances when possible by discrediting Secretary Clinton.” The reporting has yet to implicate Putin himself, but Goldstone’s email citing a Russian official’s offer to “provide the Trump campaign with some official documents and information that would incriminate Hillary and her dealings with Russia,” as part of “Russia and its government’s support for Mr. Trump” is the clearest public evidence yet of the IC’s conclusion. And the emails were released by Trump Jr. himself—right before The New York Times posted them.
We need to stop saying of the intelligence community—as Donald Trump Sr. has encouraged—“These are the people who brought us Iraq WMD” and start saying, “These are the same people who found bin Laden.” In fact, Donald Trump Jr. proudly displays an American flag signed by members of SEAL Team Six—the unit that took out bin Laden—in his office. Junior should have thought harder about the kind of intel that helped the SEALs succeed—and what it might mean for his father.