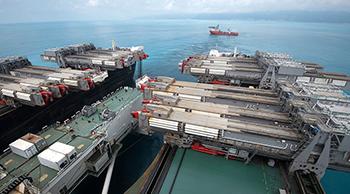 Russian energy major Gazprom and Turkey’s state-owned BOTAS have reached financial terms for the natural gas pipeline through Turkey, according to BOTAS General Director Burhan Ozcan.
“We have already agreed with Gazprom on this issue, but I cannot disclose the figures, in what percentage share we will do it,” he told RIA-Novosti on the sidelines of the 22nd World Petroleum Congress.

The gas pipeline project, known as Turkish Stream will consist of two branches. The first with a maximum capacity of 15.75 billion cubic meters is expected to be finished in 2018 and deliver Russian natural gas directly to Turkey. The second branch is supposed to deliver gas to European customers through Turkey.
Ozcan added that work on getting approval for the construction of the second branch was “going smoothly, without any hidden dangers.”
Russia and Turkey officially agreed on the project in October 2016, with an estimated cost of €11.4 billion ($12.9 billion).
Earlier this month, Gazprom signed an agreement with Hungary to deliver gas via the pipeline. Hungary’s Foreign Minister Peter Szijjarto said the Turkish Stream branch to Hungary would be completed by the end of 2019. He added that Budapest sees it as the best option, as other routes through Romania and Croatia are less well advanced.