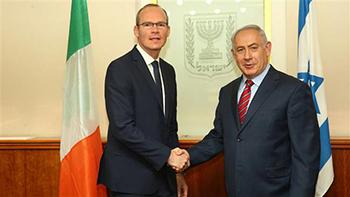 Enraged by Dublin’s financial aid to anti-Israel Palestinian rights groups, Prime Minister Benjamin Netanyahu has lashed out at visiting Irish Foreign Minister Simon Coveney over his country’s pro-Palestine policy.
Netanyahu’s office made the criticism in a statement issued on Tuesday after the premier’s meeting with Coveney in Jerusalem al-Quds.

The premier “expressed his dissatisfaction over Ireland’s traditional stance” on Palestine and urged Coveney to condemn what he called Palestinian “incitement,” the statement read.
He also challenged the top Irish diplomat over Dublin’s assistance to the “NGOs that call for the destruction of Israel,” it added.
Coveney, for his part, said in a news briefing that his discussions with Netanyahu touched on a range of issues, including Israeli settlements, the humanitarian and political situation in the blockaded Gaza Strip and the so-called peace process.
“Of course, we have clear differences on some issues, but these differences are honestly held and openly expressed,” he noted.
Ireland runs Irish Aid, an official overseas development program for overseas development.
A number of Palestinian rights groups, such as Al-Haq, Addameer and the Palestinian Center for Human Rights, are funded by the program.
During his three-day trip, which began on Monday, Coveney is scheduled to meet with Palestinian President Mahmoud Abbas, United Nations officials and representatives from the NGOs funded by Irish Aid.
Speaking prior to his departure for the occupied territories, Coveney said he was “looking forward to hearing a diverse range of views from” the Palestinians, Israelis and NGOs.
“Of course, I will also use the opportunity to make clear Ireland’s concerns about the impact of the continuing occupation and the fact that, as things stand, the prospects of a comprehensive peace agreement remain dim,” he pointed out.
The meeting took place on the same day that Ireland’s South Dublin County Council voted unanimously to fly the Palestinian flag over the County Hall in Tallaght for a month in solidarity with the “oppressed people of Palestine.”
It has become the fourth Irish local authority to make such a move in recent months.
“I am delighted with [the] vote in solidarity with the people of Palestine. It might seem like a very small gesture but I know from the reaction to similar decisions made by other councils that today’s vote will be applauded across Palestine and elsewhere,” said Councilor Enda Fanning.
About 600,000 Israelis live in over 230 settlements built illegally since the 1967 occupation of the Palestinian territories.
Palestinian officials say they want the resolution of the conflict with Tel Aviv based on the so-called two-state solution along pre-1967 boundaries.
However, Netanyahu has on several occasions said Israel should maintain its military occupation of the West Bank under any agreement with the Palestinians.
In recent months, the Tel Aviv regime has stepped up its illegal settlement construction activities in the occupied lands and oppressive measures against the Palestinians, leading to an increase in global anti-Israel sentiment.