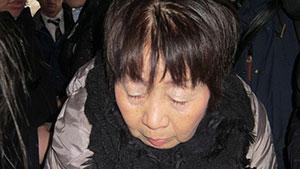 A Japanese pensioner accused of killing three partners and attempting to murder a fourth has told a court that she fatally poisoned her husband.

Chisako Kakehi was arrested in 2014 and went on trial in Kyoto late last month.
Her lawyers have pleaded not guilty on her behalf, and when her trial began she said only that she would “leave everything” to her defence team.
But in court, asked if she killed her husband, she said there was “no mistake”, the Mainichi reported.
The 70-year-old said she committed the crime because her husband was not treating her well financially, and that she obtained the cyanide from a business associate.
“I wasn’t given any money after I married him,” the Japan Times quoted Ms Kakehi as telling the court on Monday. “I have no intention of hiding the guilt. I will laugh it off and die if I am sentenced to death tomorrow.”
Prosecutors say Ms Kakehi targeted the men for their money and poisoned them all with cyanide.
The investigation began when Isao Kakehi, her fourth husband who she reportedly met via a match-making site, died on 28 December 2013, a month after they got married.
A post mortem examination subsequently found traces of cyanide in his body, and investigators then began examining the deaths of other men linked to the pensioner.
She is now on trial for murdering him and two other boyfriends, and the attempted murder and robbery of another boyfriend who later died of cancer.
The men were all aged between 70 and 80 when the alleged crimes took place between 2007-2013.
Ms Kakehi’s three other husbands also all died, but she has not been charged in connection with their deaths.
Lawyers for Ms Kakehi say her testimony cannot be trusted, because she has mild dementia.
“Since she is suffering from dementia, she barely remembers things that happened recently let alone the incidents,” her team was quoted as saying at the start of the trial, which is expected to continue until November.
Japanese press have dubbed Ms Kakehi a “black widow” – a term derived from the female spider that eats its partner after mating.
In April another Japanese woman, Kanae Kajima, who was convicted of killing three lovers, lost a final appeal against her death sentence at the Supreme Court.