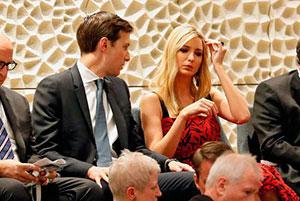 Emily Shugerman
Jared Kushner tried and failed to secure a $500m loan from one of Qatar’s richest businessmen, before pushing his father-in-law to toe a hard line with the country, it has been alleged.

This intersection between Mr Kushner’s real estate dealings and his father-in-law’s international issues highlights the difficulties of an administration besiged with an unprecedented number of conflicts of interest.
Early in his real estate career, Mr Kushner purchased a building at 666 Fifth Avenue in New York for $1.8bn – a record-setting deal at the time.
These days, however, more than a quarter of the office space in the building is vacant. According to The New York Times, the building has not generated enough to pay its debts in several years, forcing Kushner Companies to cover the multimillion-dollar difference.
In 2015 – while Donald Trump was firing up his presidential campaign – Mr Kushner was working with his biological father to keep the property from going underwater. The men zeroed in on Qatari billionaire sheikh Hamad bin Abdullah Al-Thani (HBJ) as a potential investor.
HBJ eventually agreed to invest $500m in the property, sources tell The Intercept, on the condition that Kushner Companies found the rest of the money for the multi-billion-dollar project on its own.
For help, Kushner Companies turned to Chinese insurance company Anbang. The company agreed to secure a $4bn construction loan to develop the property in early March. But weeks later, as concerns about conflicts of interest mounted, Anbang pulled out.
Without the help of Anbang, Kushner Companies could not meet the rest of HBJ’s funding demands. According to one source in the region, HBJ killed the deal. According to another, he simply put it on hold.
Either way, a diplomatic crisis centred around Qatar broke out shortly thereafter. In early June, at least six Gulf Region countries severed or reduced ties to the country, claiming it had supported terrorism.
The countries issued a list of demands necessary for Qatar to regain favour, including shutting down the media network Al-Jazeera, cutting ties with various Islamist groups, limiting ties with Iran, and expelling Turkish troops.
The move sent the tiny, isolated nation into an economic tailspin. Secretary of State Rex Tillerson quickly encouraged the countries to engage in “calm and thoughtful dialogue“ and asked for “no further escalation by the parties in the region”.
Mr Trump, however, unleashed a string of criticism toward the country, calling it a “funder of terrorism at a very high level”.
“So good to see the Saudi Arabia visit with the King and 50 countries already paying off,” he tweeted on 6 June. “They said they would take a hard line on funding, extremism, and all reference was pointing to Qatar.”
The President’s position took Mr Tillerson by surprise, and sources say he suspected Mr Kushner was behind it all.
A source close to Mr Tillerson told The American Conservative that the Secretary of State is convinced that some of Mr Trump’s remarks were written by UAE ambassador Yousef Al Otaiba – a close friend of Mr Kushner.
“Otaiba weighed in with Jared and Jared weighed in with Trump,” the source said. “What a mess.”
But even if the source’s account of the proceedings is true, it still leaves open the question of why Mr Kushner wanted to convince the President to speak out against Qatar.
Mr Tillerson’s reasons for supporting the small country, and urging a quick end to the conflict, however, are more clear: The US runs a crucial airbase out of the country, which runs air campaigns against Isis in Iraq and Syria, and helps protect Israel.
Mr Tillerson left on Monday for a trip to Turkey, Kuwait, the UAE, Qatar, and Saudi Arabia to help mediate an end to the crisis. Kushner Companies did not respond to The Independent’s request for comment.
Independent News Service