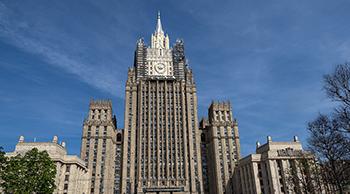 Moscow is working on retaliatory measures for the closure in the US of two Russian diplomatic compounds and expulsion of 35 diplomats, as Washington stalls on the issue, Foreign Minister Sergey Lavrov said, amid reports that US officials could be expelled.

“This situation is just outrageous,” Lavrov said, noting that the two diplomatic compounds confiscated by the Obama administration in December of 2016 have still not been released.
“I believe that it is just shameful for such a great country as the US, which champions international law, to leave the situation in suspension,” the top Russian diplomat said, adding the confiscation was just a final spasm of an administration trying to do maximum damage to US-Russian relations and everything possible to maneuver the new Trump administration into an awkward position.
The Obama administration said it took the action against Russia in response to alleged interference in the US elections.
Lavrov went on to say that Moscow is now working on reciprocal measures, but refused to provide any details.
“We are thinking about some particular steps now,” the foreign minister told journalists, saying that he did not believe those steps should be publicly discussed at the moment. He mentioned, however, that Moscow would seek justice and demand that international norms regarding diplomatic property be observed.
The issue of the confiscated compounds was raised during talks between Russian President Vladimir Putin and his US counterpart, Donald Trump, on the sidelines of the G20 summit in Hamburg, Germany, Russia’s Izvestia daily reports, citing sources in the Russian Foreign Ministry. However, it is apparently clear that the US has no plans to return the diplomatic property.
“There is a preliminary agreement concerning a meeting between Russian Deputy Foreign Minister Sergey Ryabkov and US Under Secretary of State for Political Affairs Thomas Shannon in St. Petersburg. If the sides fail to find a compromise [during that meeting], we will have to resort to [reciprocal] measures,” a Foreign Ministry official told Izvestia, without specifying the date of the meeting.
In the meantime, Ryabkov told reporters that the longer the US delays, the more likely it is that Moscow will deliver a “tough response.”
Moscow considers expelling 30 US diplomats – report
Citing sources it has within the Russian Foreign Ministry, Izvestia reported that Russia is planning to expel some 30 US diplomats and seize US diplomatic property in response.
Another ministry source told the daily that a summer residence for US embassy staff in northwestern Moscow could be seized, as well as a warehouse in the Russian capital. The US ambassador’s residence, Spaso House, and the embassy school in St. Petersburg are likely to be left unaffected, however.
“In six months, Trump either could not resolve the issue or did not see fit to settle it. Now, we must draw the line and take tit-for-tat measures,” the deputy head of the Russian Federation Council’s Foreign Affairs Committee, Andrey Klimov, told Izvestia.
Klimov also said that the response would “not demonstrate Russia’s negative attitude towards the US,” but be a reminder that respect should be shown and international law, diplomatic etiquette, and protocol be observed when dealing with Russia.
On December 29, 2016, the US expelled 35 Russian diplomats and denied Russian diplomatic staff access to the New York and Maryland compounds in what the then-US President Barack Obama called a response to the Russian government’s “aggressive harassment of US officials and cyber operations aimed at the US election.”
The move provoked an angry reaction in Moscow, which believes the diplomatic compounds in New York and Maryland had diplomatic immunity and were thus confiscated in violation of the 1961 Vienna Convention on Diplomatic Relations.
Later in December, the Russian Foreign Ministry proposed expelling 35 US diplomats as a tit-for-tat measure, but President Putin rejected the suggestion and called the move by the outgoing Obama administration a provocation.
In the meantime, the current US administration still faces pressure from some parts of the establishment in regard to the Russian diplomatic compounds issue. On July 6, three senators from the Foreign Relations Committee sent President Trump a letter asking him not to return the compounds.
“The return of these two facilities to Russia while the Kremlin refuses to address its influence campaign against the United States would embolden President Vladimir Putin and invite a dangerous escalation in the Kremlin’s destabilizing actions against democracies worldwide,” read the letter signed by Senators Marco Rubio (R-Florida), Jeanne Shaheen (D-New Hampshire) and Johnny Isakson (R-Georgia), as cited by AP.