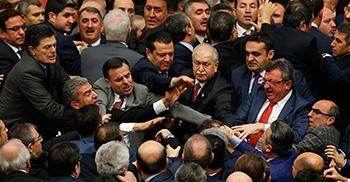 A draft bill proposed by the ruling Justice and Development Party (AKP) and the Nationalist Movement Party (MHP) has recommended giving fines to lawmakers who brawl inside the parliament.

The change comes as part of an 18-article draft bill overhauling the internal regulations of parliament. The AKP says the changes are necessary to overcome what it says are opposition parties’ efforts to slow down legislative works.

Accordingly, the draft bill includes the introduction of sanctions for deputies who “act or speak in a way that clouds the respectability of the parliament.”

Visual objects, including banners and posters – which are often used by the main opposition Republican People’s Party (CHP) – will be included within the scope of the regulations and will be considered “materials that disrupt work order and peace.”

The draft bill also includes a 6,000 lira fine for any deputy who voices “insults” within parliament. If a lawmaker “insults” or “swears” at the group deputy chairperson directing the session or members of the Parliamentary Board, they will be banned from three sessions and 12,000 liras will be cut from their salary.

Meanwhile, physical attacks including punching, slapping, pulling hair and kicking have been taken under the scope of “heavy punishments.”

The draft bill also introduces sanctions for lawmakers who carry weapons into parliament.

Accordingly, if a lawmaker carries a weapon inside parliament’s compound they will receive “condemnation” and 6,000 liras will be cut from their salary. If the lawmaker enters the General Assembly with the weapon, they will be temporarily suspended from parliament and they will be fined up to 12,000 liras.