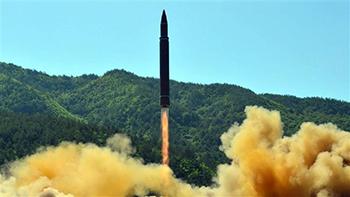 The US military says its controversial Terminal High Altitude Area Defense (THAAD) system has successfully shot down an incoming intermediate-range ballistic missile (IRBM) during a test over the Pacific Ocean.
IRBM is similar to the ones being developed by countries like North Korea, which test-launched which it claimed to be an intercontinental ballistic missile (ICBM) on July 4 amid heightened tensions with the United States.

The US Missile Defense Agency (MDA) said in a statement that THAAD managed to shoot down the IRBM target launched from the Pacific Spaceport Complex in Kodiak, Alaska, on Tuesday.
“The successful demonstration of THAAD against an IRBM-range missile threat bolsters the country’s defensive capability against developing missile threats in North Korea and other countries around the globe and contributes to the broader strategic deterrence architecture,” the MDA said in the statement.
“I couldn’t be more proud of the government and contractor team who executed this flight test today,” MDA director Lt. Gen. Sam Greaves said. “This test further demonstrates the capabilities of the THAAD weapon system and its ability to intercept and destroy ballistic missile threats. THAAD continues to protect our citizens, deployed forces and allies from a real and growing threat.”
The test was the first-ever of the THAAD system against an incoming IRBM. The test was planned months ago, but it came at a time when the United States is threatening to launch a military action against North Korea over its nuclear and ballistic missile tests.
North Korea says it will continue to carry out tests as the country has a right to develop deterrence against any possible aggression from the United States which is engaged in military build-up on its doorstep.
The United States has adopted a war-like posture, sending a strike group and conducting joint military drills with North Korea’s regional adversaries Japan and South Korea.
The Trump administration has repeatedly said in recent months that all options are on the table.
After the July 4 North Korean test, US President Donald Trump threatened the country with “consequences”. Trump said he was considering a “severe” response to Pyongyang’s “very bad behavior.”
North Korea has threatened the US with a nuclear attack in case of a direct military action.
THAAD, which is a ground-based missile system that can defend against short-, medium- and intermediate-range ballistic missiles at the terminal stage of flight, became operational in South Korea in May.
Seoul and Washington reached an agreement over the THAAD’s deployment in July last year, declaring that the objective is to protect South Korea against North Korea’s alleged missile threats.
Pyongyang has expressed its strong opposition to the move, saying the US advanced missile system in the South would destabilize the region’s security by upsetting the military status quo.