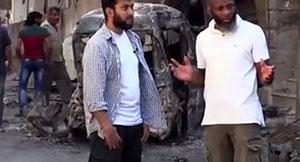 CNN has curiously diminished the role of a major contributor to its Peabody Award-winning documentary “Undercover in Syria,” ostensibly because that contributor is linked to the country’s al-Qaeda affiliate.

Radio Sputnik’s Loud and Clear spoke with Alternet’s Ben Norton about the documentary, where CNN sources its handlers, and how this speaks to the bigger issue of deep hypocrisy within the mainstream media concerning US foreign policy.

​Norton co-wrote a recent article with Max Blumenthal entitled “CNN Hired Top al-Qaeda Propagandist for Award-Winning Syria Documentary and Wants to Cover Its Tracks,” which told the story of American “independent journalist” Bilal Abdul Kareem, who Norton says was able to gain access that proved deadly for other journalists because of his cozy relationship with terrorists.

“In summary, what’s going on is there’s an American who is very closely tied to al-Qaeda and other extremist groups, who has been accused by numerous sources of actually being a member Syria’s Al-Qaeda affiliate, Jabhat al-Nusra, and has lived in Syria for several years,” Norton explained.

Kareem “has created a small media cult following but has significant impact when it comes to the issue of Syria because he is the only English-speaking Western journalist in al-Qaeda-held territory in Syria.”

Norton said that other journalists who have attempted to enter territory held by al-Qaeda have often ended up kidnapped or killed, and claimed to personally know a journalist who was kidnapped by the extremists and who told him that she heard about Kareem’s involvement with al-Qaeda being discussed casually while she was being held in Idlib, where Kareem was based.
Syrian men walk past a poster bearing a portrait of President Bashar al-Assad in the capital Damascus, on February 27, 2016, as the first major ceasefire of the five-year war takes hold and an international task force prepares to begin monitoring the landmark truce

“The crux of it is, this is someone who is closely linked to, if not an outright member of, al-Qaeda. He has denied it of course, but there are a lot of ties and circumstantial evidence” to suggest this connection, Norton said. He noted that a colleague of Kareem’s who helped Kareem with his On The Ground News outlet was stripped of his British citizenship for alleged connections to al-Qaeda.

Norton said that it’s “no surprise” that corporate media outlets like CNN would work with Kareem, as they “fawn” over Syrian opposition groups and say “nothing positive about the Syrian government and its allies.”

“There are certainly problems with the Syrian government,” Norton allowed, “but this is one-sided propaganda. This is not just that rebel perspective that CNN is propagating, it is the perspective of extremist groups in rebel-held territory.”

In a video posted to Twitter in June, Kareem complained that CNN had not fully acknowledged his contributions to the documentary, saying that the network “barely mentioned my name! I’m telling you, somehow CNN must have forgotten that I was the one that filmed it, I guess they forgot that.”
A United Nations (UN) arms expert collects samples, as he inspect the site where rockets had fallen in Damascus’ eastern Ghouta suburb during an investigation into a suspected chemical weapons strike near the capital (File)

“CNN has essentially distanced itself from him,” Norton said. “It hasn’t completely ignored him, but he’s always mentioned as a mere footnote. He is almost never mentioned in any of the official statements or speeches about the documentary, even though as he said himself, he played a crucial role in creating it. He was the videographer, he was actually on the ground.”

Though it is CNN that has this time reaped the rewards of Kareem’s connections, Norton said that corporate media outlets of all political leanings behave similarly when addressing the US’ movements in Syria.

“They’ve all been just as irresponsible when it comes to this issue. When it comes to US foreign policy and other countries and non-state actors that are enemies of the US government, there is a media uniformity with which they are all presented, and Syria has been no exception.”