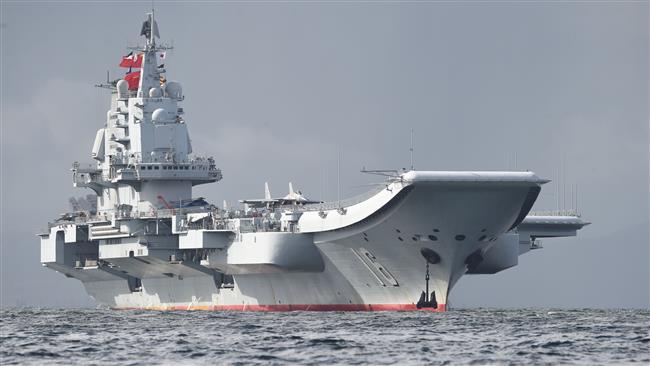 Taiwan says a Chinese aircraft carrier has entered its “air defense identification zone (ADIZ)” and is being monitored by Taipei as the carrier sails back from a trip to Hong Kong.
Taiwan’s Ministry of National Defense added in a statement on Wednesday that the 60,000-ton carrier had entered the ADIZ at 02:40 a.m. local time and had steered north via the western side of the Taiwan Strait, China’s side of the strait.

It further said that the ministry was monitoring the situation but since there had been no “unusual developments” at the time, Taiwanese people should not be alarmed.
The Chinese aircraft, the Liaoning, is capable of sailing at a top speed of 37 kilometers per hour and can carry 36 aircraft.
The warship arrived in Hong Kong, a special administrative region of China, on Friday for events celebrating the 20th anniversary of the former British colony’s handover to China. The Soviet-built carrier lay anchored in the city’s harbor until Tuesday noon, when it left the city.
The alleged entry into Taiwan’s “ADIZ” has been the fourth time the Liaoning has sailed near the island territory, which China claims as a breakaway province.
On July 2, the carrier sailed through the Taiwan Strait, as it was making its way to Hong Kong, prompting Taipei to scramble warplanes to shadow the ship.
In December last year, a Chinese naval battle group, involving the Liaoning, conducted a live-fire drill in China’s northeastern waters in a show of force amid an escalating war of words with the United States over Taiwan. US President Donald Trump had just taken a call from the Taiwanese president — a breach of diplomatic protocol — and had implied in later remarks that Washington would not have to abide by the so-called One China policy of recognizing Chinese sovereignty over Taiwan.
Although he later backtracked, reassuring China of his administration’s commitment to the “One China” policy, Trump has continued a long-time US policy of engaging in military ties with Taiwan. In late June, the US approved sales of arms worth $1.42 billion to Taiwan, enraging China. The arms deal includes advanced missiles and torpedoes, in addition to technical support for an early warning radar system.
On June 12, Panama broke ties with Taiwan in favor of establishing formal relations with China. That brought the number of the countries that formally recognize the island as a sovereign country down to 20.