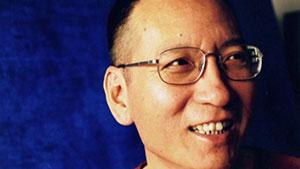 Liu, China’s best-known political prisoner and civil rights campaigner, was released from prison on 23 June under medical parole with late stage liver cancer.
He was one of China’s most well known political prisoners.
He was jailed for 11 years in 2009 for “inciting subversion of state power” after he helped write a petition known as “Charter 08” calling for sweeping political reforms.
The hidden dissident
Liu’s illness has been shrouded in mystery in his homeland.
Patients at the First Hospital of China Medical University in the northeastern city of Shenyang, where Liu was being treated, didn’t appear to know he was there.
When Reuters visited the floor, visitors for other patients on the same ward seemed confused and asked why there were new procedures when security questioned them and checked their IDs.
Indeed, nothing has appeared in Chinese-language official media since Liu was diagnosed with cancer in late May.
Searches for “Liu Xiaobo” on Chinese social media show no results.
The government had warned repeatedly against interference and said Liu was being treated by renowned Chinese cancer experts.
Asked by Reuters why questions and answers on Liu were missing from the foreign ministry website, ministry spokesman Geng Shuang said: “If you can decide how to write [your reports], then I think as the Ministry of Foreign Affairs, we can decide what goes online or not.”
The Global Times, a nationalist tabloid published by the official paper of the ruling Communist Party, is the only publication that regularly writes articles about Liu, in English, and usually to rebuff international criticism.
The paper has cast Liu as an outsider marginalised from society whose cause has failed inside China.
It was “overseas dissidents” who are the most active in “hyping the issue” and are trying to “boost their image by ‘deifying’ Liu,” the Global Times said in a Monday editorial. “Western mainstream society is much less enthusiastic than before in interfering with China’s sovereign affairs,” it said.
Charter 08
Liu was the co-author of a pro-democracy manifesto called Charter 08, which attracted more than 10,000 signatures online before the authorities deleted the document from internet pages and chatrooms. He was awarded the Nobel Peace Prize in 2010, a year after he was sentenced to 11 years in prison for inciting subversion.
Issued in 2008, Charter 08 reflected an apparent shift in China at the time towards becoming more open to liberal ideals, said Beijing-based historian and political commentator Zhang Lifan. That changed when Xi Jinping came to power in 2013.
Hu Jia, a well-known Beijing-based dissident and friend of Liu’s, says few people in China know anything about him or his work.
“The reality is that if you are on the streets of Beijing and you stop a hundred people, to have one know who Liu Xiaobo is would be a great result,” he said.
“Chinese society, due to internet censorship and being cut off from the rest of the world, essentially does not get to hear our (dissident) voices. Protesting voices on Weibo are almost not existent these days,” Hu said.
Pleas from his wife
Announcing the death, the Shenyang legal bureau said in a statement on its website that Liu had suffered multiple organ failure and efforts to save him had failed.