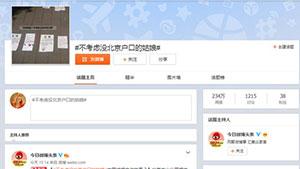 By Patrick Evans BBC News
Tens of thousands of users of the Chinese micro-blogging site Weibo are engaging in a lively discussion about dating in China.
An article in the state-owned magazine Phoenix Weekly on what Beijing people look for in China’s “marriage markets” often arranged in parks has caught people’s attention.

It is customary for some elderly relatives to meet in parks around China and to help their sons and daughters find matches. The piece interviews parents about what their children require in a match and some of the answers are very specific.
“No people whose Chinese Zodiac is a sheep,” says one. Those born in the year of the sheep are frowned upon by matchmakers, as they are perceived as meaning a lifetime of bad luck.
One woman with the surname Li, advertising her 33-year-old son in a Beijing park, says her son “will not consider someone who does not have a Beijing hukou.” A Hukou is a household registration document.
Phoenix Weekly said parents seeking matches for children from outside of Beijing encountered great difficulty in the city’s markets.
Thousands of users are commenting about the story and say they feel sorry for those born in the year of the sheep, and question the snobbishness of Beijing people.
“My mother is a sheep, my girlfriend is also a sheep… this superstition is nonsense, sheep have the best temperament,” writes one user.
One single man joked: “I am a cow, you can come and eat grass with me.”
The hashtag #WontConsiderABeijingGirl# has proven popular among Weibo users, and many reacted strongly to the article likening having a non-Beijing residence permit to having “a disability”.
Over 2.3 million users have read posts containing the hashtag, and over 1,000 have used it.
“What’s up with the Beijing people? Are they on a higher plane?” one user asks. Another says “this is very snobbish.”
“No wonder so many people are still single,” remarked one. “Does true love still exist?” asked another commenter.
Due to China’s gender gap there is increased competition among men to find a partner.
Beijing vs the country
“Beijing people really live a privileged life,” complained one person on Weibo.
There are long-standing tensions around the perception that inhabitants of the capital city are generally favoured over those from the regions.
The city has reformed its hukou system to break down the urban-rural barrier and make it easier for rural Beijing citizens to gain status in the city.
In September, the Beijing government introduced a unified residence permit system, allowing rural Beijing citizens to enjoy the same health, education, employment and housing rights as urban citizens.
Additional reporting by BBC Monitoring’s Kerry Allen