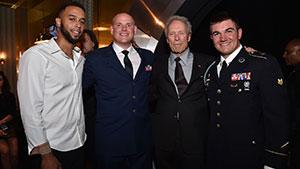 Three California friends who stopped an alleged terror plot will play themselves in The 15:17 To Paris.
By Duarte Garrido, Entertainment Reporter

Clint Eastwood is using real-life heroes to play themselves in his film about the Paris train terror plot.
The acclaimed director’s new film will be titled The 15:17 To Paris and will tell the story of the three California friends who stopped an alleged attacker on a train in 2016.
Alek Skarlatos, Spencer Stone and Anthony Sadler will play themselves, in a move rarely seen in a big-budget film.
The three men are non-actors and will be joined by a relatively unknown cast, a strategy adopted by Eastwood in past films such as Gran Torino and Jersey Boys.
According to Variety, Eastwood and the studio started off looking for professional stars to cast for the roles, but eventually changed their minds and decided on the real men.