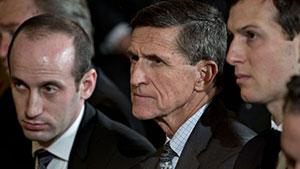 Los Angeles: A Californian lawmaker has introduced articles of impeachment against US President Donald Trump, making good on a promise he made to move the process forward.

Brad Sherman, an 11-term Democrat who represents part of the San Fernando Valley, was the first to draft and circulate articles of impeachment last month. He formally introduced the measure, titled HR 438, on the House floor Wednesday afternoon.

The measure accuses Trump of obstruction of justice and seeking to “use his authority to hinder and cause the termination” of an investigation into former national security adviser Michael Flynn, including “through threatening, and then terminating, James Comey”.

Democrat Al Green of Texas who had previously held a joint news conference with Sherman supporting the effort to impeach Trump, was the only co-sponsor of the measure.

Sherman’s move has put him at odds with House Democratic leaders, who have tried to quiet talk of impeachment, hoping instead to focus on the economy, healthcare and the investigation into Russia’s interference in the presidential election.

Sherman had previously said no other members had signed on to support his proposal. After House Democratic leaders expressed concern about his effort, Sherman said he assured House Minority Leader Nancy Pelosi that he wouldn’t ask for a floor vote on impeachment without consulting the Democratic caucus.

Asked for comment on the impeachment effort, Pelosi responded with a statement calling again for independent commission to investigate Russia’s interference in the 2016 election.

The impeachment measure is a long way from a floor vote and is expected to be referred to the House Judiciary Committee. It faces substantial resistance in the GOP-controlled House.

In a statement, Sherman said he and Green would push the Judiciary Committee to hold hearings on the matter. He added that he hopes introducing articles of impeachment would “inspire an ‘intervention’ in the White House.”

He called his move “the first step on a very long road” and said he believed that Republicans would join the effort “many, many months from now” if Trump’s “incompetence” continues.