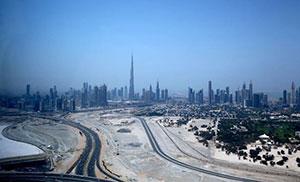 Sean Cronin
LONDON: Dubai property transactions plunged by 23 percent in the second quarter, according to a report from Chestertons.
But the weak property market is good news for renters who benefitted from a 2 percent decline in rents for both apartment and villas over the quarter, the estate agency said.

The Dubai property market has remained in the doldrums for about three years as weak oil prices and a strong dollar, to which the UAE dirham is pegged, have curbed demand for new homes.
“The positive momentum from the first quarter did not translate into increased activity in the second quarter, as the decline was evident in both completed units and off-plan transactions,” said Ivana Gazivoda Vucinic, head of advisory and research at Chestertons MENA. “Seasonality and an amount of uncertainty have curbed transactional volumes.”
But the broker still expects a pickup in activity in the second half of the year with sales and rents ticking up toward the final quarter of 2017.
Recent data suggests that most of the action in the Dubai property market is taking place at the affordable end of the spectrum as luxury property prices continue to fall.
Chestertons said that apartment prices were broadly flat during the second quarter with the highest increase in sales prices coming from Dubai Silicon Oasis. Jumeirah Village Triangle also saw an 11 percent increase in sales prices.
That chimes with research from other brokers reflecting higher demand for affordable locations.
“In places like Discovery Gardens and International City, we have had no movement in values for well over 12 months now. They have held steady and that boils down to affordability. It is what people can afford and also it also available in limited supply,” said Faisal Durrani, head of research at Cluttons.
Smaller units were more resilient to the decline as studios and one-bedroom apartments together with two and three-bedroom villas witnessed the lowest drops, Chestertons said.
The top areas based on sales transaction volume were Dubai Marina, Emirates Living and Palm Jumeirah.