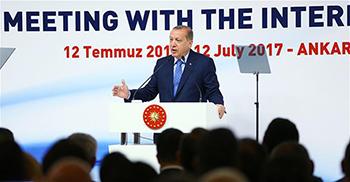 The state of emergency declared in the aftermath of Turkey’s failed July 2016 coup attempt may be lifted in the “not too distant future,” President Recep Tayyip Erdoğan has said, while underlining that it will continue until the fight against the Fethullahist Terror Organization (FETÖ) is “completely finished.”

“We will certainly end this implementation once the need in our anti-terrorism fight is removed. FETÖ cases have started to take shape, and we have also gained significant ground in the anti-PKK fight. So it is possible that the state of emergency will be lifted in the not too distant future, even though we are already implementing it in a very limited area,” Erdoğan said in a speech to investors in Ankara.

However, he also said it was “out of the question” under current circumstances to the lift emergency rule.

The government declared a state of emergency on July 20, 2016, five days after the failed coup attempt, in a professed bid to cleanse state institutions of FETÖ members. Around 100,000 people have been expelled from the state through state of emergency decrees, while 50,000 have been arrested on charges of links with FETÖ including academics, journalists and civil society activists.

“I ask you [businesspeople] now. Is there any difficulty in carrying out your business?” he added.

President Erdoğan also compared the state of emergency to previous similar eras, recalling that “all factories were under the threat of strikes.”

“Remember those days? Is there anything like this today? To the contrary, we intervene in calls for strikes using the rights stemming from the state of emergency. ‘No, we don’t allow strikes because you cannot shake our business world,’ we say. That’s why we are implementing the state of emergency,” he said.

Stating that Turkey stands as a “safe harbor” and rejecting criticisms that there is no freedom of thought or media freedom in the country, Erdoğan said there is “no such thing as limitless press freedom.”

“If the media tries to mix up the country and abuse its freedom to stage provocations then justice will step in for them. The same applies in Western countries too,” he added.

“If you call on people to hit the streets, it will be you who will not be able to step out in the end,” Erdoğan said.

“The name of the justice sought in the streets is revenge. The end is vandalism. The legitimate grounds for seeking justice are well known,” he added.

The president claimed that the CHP leader’s statements and actions “only please FETÖ members” and members of the outlawed Kurdistan Workers’ Party (PKK).