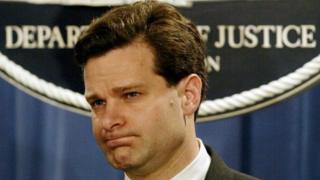 Donald Trump’s pick to lead the FBI has rejected the president’s depiction of a probe into alleged Russian meddling in the US election as a witch hunt.

“I do not consider Director Mueller to be on a witch hunt,” Christopher Wray said about the former FBI director who is leading the special investigation.
Mr Wray, 50, also told a Senate hearing he would quit if the president asked him to do anything illegal.
The last FBI director, James Comey, was fired by the US president on 9 May.
The US president earlier on Wednesday tweeted: “This is the greatest Witch Hunt in political history. Sad!”
Mr Wray told the Senate panel on Wednesday: “Anybody who thinks that I would be pulling punches as FBI director sure doesn’t know me well.
“I will never allow the FBI’s work to be driven by anything other than the facts, the law, and the impartial pursuit of justice. Period.”
The nominee said he was “very committed to supporting” the work of special counsel Robert Mueller.
Mr Mueller, who was described by Mr Wray as “a straight shooter”, is a former FBI director who is now leading the special inquiry into alleged Russian attempts to influence the 2016 US presidential election.
Mr Wray also faced questions about emails belonging to Donald Trump Jr – the president’s eldest son – arranging a meeting with a Russian lawyer linked to the Kremlin.
The nominee told senators he was unfamiliar with the emails.
Senator Lindsey Graham read out the text of the emails to him and asked if Mr Trump Jr “should have taken that meeting”.
“I would think you’d want to consult with some good legal advisers before you did that,” said Mr Wray when pressed by the South Carolina Republican.
“Any threat or effort to interfere with our elections from any nation state or non-state actor is the kind of thing the FBI would want to know”, he continued.
Mr Wray added that he has “no reason to doubt” the assessment by US intelligence agencies that Russia sought to influence the 2016 election in Mr Trump’s favour.
Last month, Mr Comey told a congressional hearing that Mr Trump had requested a pledge of loyalty to him, which Mr Comey said he had refused to give.
Mr Wray declared: “My loyalty is to the constitution, to the rule of law, and to the mission of the FBI.
“And nobody asked me for any kind of loyalty oath at any point during this process and I sure as heck didn’t offer one.”
Mr Comey had also told senators he was worried about meeting one-on-one with Mr Trump, because he was concerned the president might lie later about their discussion.
When Mr Wray was asked how he would respond to a private invitation from Mr Trump, he said such a meeting would be “highly unlikely”.
But he added it would depend on the circumstances and if national security was involved.
Mr Wray also said he would attempt to work with the justice department to ensure “it’s not a one-on-one meeting”.
“I think the relationship between any FBI director and any president needs to be a professional one, not a social one,” he said.
“And there certainly shouldn’t be any one-on-one discussion between the FBI director and any president about how to conduct particular investigations or cases”.
Mr Wray, a longtime justice department official who most recently has worked as a private criminal defence attorney, also noted his opposition to torture as an interrogation tactic.
Democratic senators, who have harshly questioned other Trump nominees during their confirmations, signalled approval for Mr Wray, indicating that he will probably be approved for the 10-year term.
If the president ever asked him to do anything illegal, he told senators, “first I would try to talk him out of it, and if that failed I would resign”.