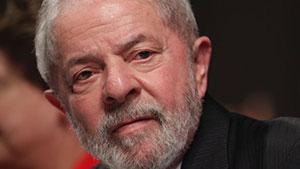 Sao Paulo: Former Brazilian president Luiz Inacio Lula da Silva has been convicted of corruption and money laundering and sentenced to nine and a half years in prison, a stunning blow to a man once hailed across the hemisphere as an innovative leftist leader.

The landmark decision marks the first conviction of the man popularly known as Lula, who also faces four other corruption charges.

His lawyers have already said he is planning to appeal, and he is not expected to face jail time while the case winds its way through the courts. Lula has proclaimed his innocence.

“No matter how important you are, no one is above the law,” said Judge Sergio Moro in his verdict.

The case against Lula, 71, who raised Brazil’s profile on the world stage as president from 2003 to 2010 and was one of the country’s most popular politicians, stemmed from charges that he and his wife illegally received about $US1.1 million ($1.4 million) in improvements and expenses for a beachfront apartment from a construction company.

In return, prosecutors said, the company was able to obtain lucrative contracts from Petrobras, the state-controlled oil and energy giant.

Moro is one of the main protagonists in Operation Car Wash, or Lava Jato, a massive corruption probe that has sent a number of the country’s top politicians to jail. Lula’s appeals process could take a year and a half.

The sentence is the latest salvo by Brazil’s judicial branch, which has declared war on the country’s entrenched culture of corruption.

The Car Wash investigation, which started as a routine inquiry into money laundering at a car wash and petrol station, has caught more than 280 people, including scores of lawmakers and some of Brazil’s wealthiest magnates. Current president, Michel Temer, was charged last month with corruption. Hundreds more remain under investigation.

Moro said Lula’s actions were part of a “scheme of systemic corruption” in Petrobras.

“The president of the republic has enormous responsibilities,” Moro wrote. “As such, his culpability is also” enormous when he commits crimes, he added.

Lula’s legal team said he was innocent and they would appeal.

“For over three years, Lula has been subject to a politically motivated investigation,” they said in a statement. “No credible evidence of guilt has been produced and overwhelming proof of his innocence blatantly ignored.”

Protesters were quick to take to the streets in some cities, both in favour and against the decision.

Lula’s two terms were marked by a commodity boom that made Brazil one of the world’s fastest-growing economies.

Lula was found guilty of charges that he accepted the use of a beach apartment – and free renovation on the home – from the engineering company OAS as a kickback. Lula’s defence said that the apartment belonged to the construction firm and that he only visited it once. In Testimony, Lula said the apartment, in his late wife’s name, and the beach where it is located were not suitable to the couple.

Lula, a former union boss with a fourth-grade education, won fame as a spokesman for Brazil’s neglected poor. A co-founder of the Workers’ Party, he led the country during an economic boom and introduced welfare policies that helped lift 36 million people out of poverty. Former US president Barack Obama once called him “the most popular politician on Earth.” Lula left office with an approval rate of more than 80 per cent.

Lula has been widely expected to run for another presidential term in the October 2018 election. Recent polls had shown him in the lead in the primaries ahead of the vote. If he were found guilty by the appeals court before the election, he would not be permitted to run. An appeal is expected to take up to eight months.

Moro is often cited as Lula’s closest rival in hypothetical match-ups in the presidential race, though Moro has ruled out running for office.

The decision was welcomed by financial markets with the Brazilian currency, the real, rising 1.4 per cent against the US dollar, the highest mark sine May. Share traders in New York had expected a re-elected Lula to oppose reforms recently put forward by market-friendly Temer, such as a pension overhaul.

“The chances of Lula making it in 2018 just fell massively and the markets really do not want to see Lula in power again,” said Alberto Bernal, chief strategist at XP Securities.