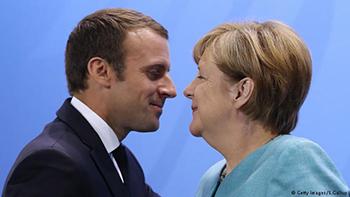 Before a joint French-German cabinet meeting, French President Emmanuel Macron has urged new German investment in Europe. EU reforms will likely top the agenda, but little progress is expected before Germany’s election.
Urging a “revitalization of public and private investment in Europe by Germany,” Macron told the Funke newspaper group and the French regional daily Ouest France that the two neighbors must agree a new “macroeconomic perspective.”

In an interview published on Thursday, he called for a new one billion euro ($1.14 billion) fund for new information technology (IT) projects, and joint programs on nanotechnology and battery storage.
Merkel and Macron: the new dream team?
His call came ahead of the joint Franco-German cabinet meeting in Paris – the first since April – which will be attended by Chancellor Angela Merkel.
Revamp required
In the interview, Macron renewed his call for reforms of the EU and specifically the eurozone, telling the papers that “the European Treaties will have to be changed some time, as this Europe is incomplete. The question is not whether we change, but when and how.”
During his election campaign, Macron promised to overhaul the 28-member bloc with a host of initiatives to deepen EU integration in the areas of defense, security and immigration. His pledge comes at a key moment in EU history – months after a British referendum where voters decided the country should ends its 40-plus year partnership with the EU.
The French president has also proposed creating a finance minister, parliament and a common budget for the eurozone, which would require changes to EU treaties.
No single debt pool
Responding to fears that German taxpayers may have to shoulder the burden of shared debts, Macron said he was not in favor of turning national debts into a single pool of eurozone debt.
Macron pledges to transform France
Macron, who beat far-right presidential candidate Marine Le Pen in May, conceded that the French economy needed urgent reforms, but added that it was up to Germany to correct the “dysfunctions” in the eurozone and give it “the fate it deserves.”
Trade imbalances underscored
“Germany … has a strong economy, but it has demographic weaknesses, economic and trade imbalances with its neighbours and shared responsibilities to give the euro area the future it deserves,” he said.
Merkel has broadly welcomed his reforms, but most analysts doubt there will be any major changes until after Germany’s federal election on September 24th, where Merkel will seek a fourth term.
Both countries’ finance ministers are expected to present a roadmap for the harmonization of their countries’ corporate taxes at Thursday’s joint meeting, the German business newspaper Handelsblatt reported on Wednesday.
After the cabinet meeting, Macron will host US President Donald Trump in the afternoon and is widely expected to challenge the former reality TV star on his decision to pull America out of the Paris climate change accord.
mm/gsw (AFP, dpa, Reuters)