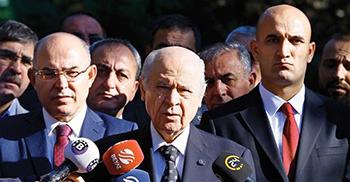 Nationalist Movement Party (MHP) leader Devlet Bahçeli has said he does not approve of Chief of General Staff Gen. Hulusi Akar’s name being involved in debates regarding failure of the National Intelligence Agency (MİT) ahead of the July 15, 2016 coup attempt.

“It’s also not appropriate to involve Akar’s name” in debates regarding the struggle against the Fethullahist Terrorist Organization (FETÖ) of U.S.-based Islamic preacher Fethullah Gülen, widely believed to have been behind the thwarted coup.

“I don’t think it’s right to involve the chief of the general staff in the debates on the intelligence failures or the struggle against FETÖ,” Bahçeli told daily Hürriyet, reflecting on the FETÖ cases and ongoing investigations one year after the coup attempt.

“Mr. Akar, who is trying to keep together a military that some tried to collapse, and who has claimed major successes in the fight against terror, should be kept away from these debates. We shouldn’t shoot our own feet when we are going through a delicate period,” he added.

“The basis of intelligence agencies is civilian structuring. Of course, there is also the military dimension and the police network, but the main command center is civilian and it should stay that way. FETÖ’s structuring within the army is another issue entirely,” he said, adding that “civilian elements, imams and brothers” were among those directing the military structuring.

“Imam,” which traditionally refers to a religious public worker, is a term used by the followers of Gülen to mark local leadership.

“This truth came out in the open after July 15. The issue of Adil Öksüz is clear,” Bahçeli said, referring to a key coup plot figure and a “civilian imam” who was detained after the attempted takeover but released a short while later. He has been missing and has been sought ever since.

During the interview, Bahçeli said “it’s the MİT Chief Hakan Fidan who can give information on who caused intelligence failures.”

“[Fidan] is the first name who can enlighten the judiciary and the necessary officials on revealing the FETÖ elements inside the MİT, as well as who and which actors caused the intelligence failure that showed itself on July 15. But I don’t find it responsible for the MİT chief to be debated out in the open, because of the possibility of weakening and wearing out the state’s crucial intelligence reflexes,” Bahçeli said.

“The CHP is making a big mistake. He is acting in an inconsistent and unprincipled way regarding FETÖ. His speech in Maltepe, the messages he gave and calling people to the streets is extremely problematic and thought-provoking,” Bahçeli said.