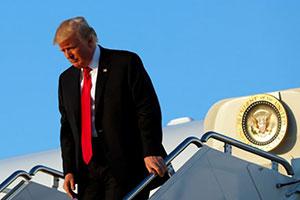 President Trump says he gets along “very well” with Russia’s President Vladimir Putin.

He was interviewed by the Christian Broadcasting Network days after his much anticipated meeting with Mr Putin at the G20 summit in Hamburg.
The US president also said he was sure Mr Putin would have preferred Hillary Clinton was sitting in the White House.
Several investigations are under way into allegations Russia helped get Mr Trump elected.
Mr Trump has denied any knowledge of this and Russia has also repeatedly denied interfering.
On the meeting with Mr Putin, Mr Trump said “people said, oh, they shouldn’t get along. Well, who are the people saying that? I think we get along very, very well.
“We are a tremendously powerful nuclear power, and so are they. It doesn’t make sense not to have some kind of a relationship.”
Mr Trump cited the recent ceasefire in south-western Syria as an example of how co-operation with Mr Putin worked.
Mr Trump also used the interview to pour cold water on the notion that Russia conspired to get him elected – quite the opposite, he maintained. Russia preferred Hillary Clinton, his Democrat rival, he said.
Why? “If Hillary had won, our military would be decimated,” he said.
“Our energy would be much more expensive. That’s what Putin doesn’t like about me. And that’s why I say why would he want me?”
Donald Trump Jr ‘innocent’
The US president earlier defended his son Donald Jr over a meeting he had with a Russian lawyer in 2016 at the height of the presidential campaign.
Mr Trump’s son met Russian lawyer Natalia Veselnitskaya at Trump Tower in New York in June 2016.
Mr Trump Jr had been told that she would offer Russian-linked information which would put Hillary Clinton in a bad light.
Critics accuse Mr Trump Jr of intent to collude with the Russians, and believe he may have broken federal laws. But others dispute this.
Donald Trump tweeted that his son was “open, transparent and innocent”. He also told Reuters he was unaware of the meeting and only learned of it two days ago.
Mr Trump Jr himself told Fox News the meeting was “such a nothing”, but he accepted he should have handled it differently.
He has released a series of emails in which he was told he would receive “very high level and sensitive information”, to which in response he said “if it’s what you say I love it”.
Kremlin spokesman Dmitry Peskov denied any link to the Russian lawyer, and Ms Veselnitskaya herself has said she was never in possession of information that could have damaged Mrs Clinton.