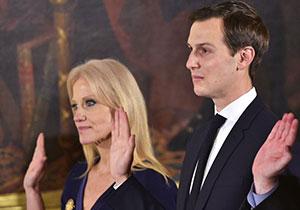 By JTA
Some Democratic senators are reportedly pushing for Kushner to give up his White House security clearance.
Federal investigators are looking into whether the Trump campaign’s digital efforts, which were led by Jared Kushner, aided Russia’s cyber attacks on Hillary Clinton’s campaign.

Members of the Justice Department and both the House and Senate Intelligence Committees believe the Trump campaign may have steered Russian cyber operatives to target voters in key states and voting precincts, McClatchy reported Wednesday.
Kushner, the president’s senior adviser and Jewish son-in-law, oversaw the Trump campaign’s successful digital operation throughout 2016.

The US intelligence community widely believes that Russians hacked into the email accounts of multiple top Democrats and leaked thousands of their messages through WikiLeaks. Investigators are now scrutinizing whether Trump’s team helped the Russian hackers deliver fake news stories about Clinton — a notable one claimed she ran a pedophile ring at a Washington pizzeria — to voters at critical times during the campaign.