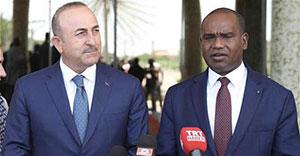 Qatar’s recent deal with the U.S. over anti-terror financing is a sign of its determination in fighting terrorism, Turkish Foreign Minister Mevlüt Çavuşoğlu said on July 12.

“I know that Qatar has always been with us on fighting terrorism. This deal is a sign of Qatar’s determination and sincerity in its fight against terrorism,” said Çavuşoğlu.

He was addressing a joint press conference with Burkina Faso President Roch Marc Christian Kabore in the capital Ouagadougou.

Qatar and the U.S. signed a deal to combat financing of terrorism during a visit to Doha by U.S. Secretary of State Rex Tillerson on July 11, a move that comes as the Gulf crisis continues in the region.

The four Gulf countries have presented a list of demands for Qatar, including the closure of the Al Jazeera television network and the closure of a Turkish military base in the country, or face further sanctions.

Qatar denies the accusations, saying the blockade is in violation of international law.

He added that he had discussed with the Burkina Faso president on bilateral relations in the fields of education, economy, mining, textile, construction and defense.

Kabore said Turkey was a “great economic power” from which Burkina Faso wants to benefit, stressing that improving relations between the two countries is a key goal.