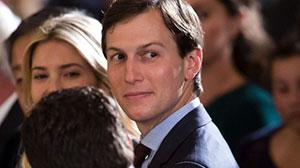 Philip Bump
In an off-and-then-on-the-record conversation with reporters on the flight to Paris on Wednesday, President Trump discussed the question of the week: His son Donald Trump jnr’s meeting with a Russian lawyer who Trump Jr. believed could provide him with negative information about Hillary Clinton.