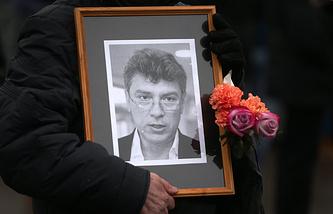 MOSCOW, /TASS/. Five convicts sentenced for the murder of Russian opposition activist Boris Nemtsov plotted a backup plan of the politician’s killing in Moscow’s Ukraina hotel where he could have arrived with his girlfriend Anna Duritskaya, Prosecutor Maria Semenenko told TASS on Thursday.
“Three hours prior to Nemtsov’s murder, Temirlan Eskerkhanov and Ruslan Mukhudinov [a suspect contractor of the murder] were staying in the Ukraina hotel as they did not rule out that he [Nemtsov[ could have come there with Duritskaya. And this was a backup plan of the murder,” she said.
On Thursday, Moscow’s District Military Court found guilty all the five defendants in the case of Russian politician Boris Nemtsov’s murder and gave them 11 to 20-year sentences in a high-security penal colony and a fine of 100,000 rubles ($1,659) each.
The decision was made by Judge Yuri Zhitnikov based on the jury’s guilty verdict. However, the court took into account the time they had already spent in custody since March 2015. Material evidence has been handed over to the Russian Investigative Committee which continues to look into the criminal case.