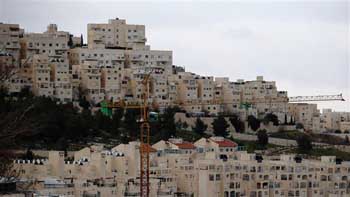 The Israeli municipality in Jerusalem al-Quds has reportedly approved a plan to construct 800 settler units in the city’s eastern part, which has been occupied by Tel Aviv since 1967.
According to a Thursday report by Israeli newspaper Maariv, the plan includes the building of 276 units in the Israeli settlement of Pisgat Ze’ev, 120 in Neve Ya’akov, 200 in Ramot and 202 in Gilo.

Since the 1967 occupation of the West Bank and East Jerusalem al-Quds, Israel has been crowding the Palestinian territories with settlements, each of which comprise hundreds of settler units.
The unlawful move defies the international bans against construction upon occupied land.
The new decision now has to clear the regional committee for planning and construction as well as the Israeli Interior Ministry.
“The construction in Jerusalem is necessary and important,” said the city’s Israeli-appointed Mayor Nir Barkat, adding that the work “will strongly continue” to get as many Israeli youths as possible to live in “the capital.”
Israel lays claim to the entirety of al-Quds, while Palestinians want East Jerusalem al-Quds as the capital of their future state.
The Israeli regime has been building more and more settlements on the occupied, a move which has been a major reason behind the collapse of previous Israeli-Palestinian negotiations.
Tel Aviv has been more assertively pursuing its claim to al-Quds since the January inauguration of US President Donald Trump, who has hinted he would order the American Embassy moved from Tel Aviv to the city.