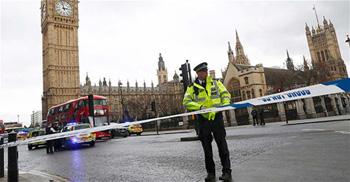 The attackers were on a scooter when they threw the corrosive substance at their victims.

All five attacks occurred in Hackney and Islington in London’s east on Thursday night, local time.

Police said they had arrested a teenage male on suspicion of grievous bodily harm and robbery. He is in custody in an east London police station.

Five victims were taken to hospital, one with “life-changing injuries”, police said.

Metropolitan Police said that a 32-year-old man on a scooter suffered facial injuries after two male riders on a scooter pulled up alongside him, hurling a corrosive substance. One of the attackers stole the man’s scooter while the other fled on the scooter he arrived on.

Footage posted on social media appears to show paramedics treating a man following the attack. They pour water into his eyes and ask him where the incident happened. “Just here,” he says, pointing to a nearby intersection.

“We need to try and get water in your eyes, keep your eyes open,” the paramedic says.

The incidents are believed to be linked. No arrests have been made.