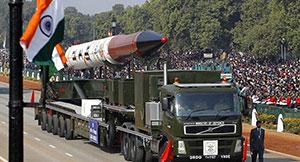 Hans M. Kristensen and Robert S. Norris belong to a select group of experts keen on writing and researching all things nuclear. Norris is currently a senior fellow at the Federation of American Scientists in Washington while Kristensen directs the Nuclear Information Project at FAS. The pair have co-authored the Nuclear Notebook since 1987, “widely regarded as the most accurate source of information on nuclear weapons and weapons facilities available to the public,” according to publisher Bulletin of the Atomic Scientists.
Next-generation ballistic missiles can be placed in central and southern India and reach nearly every region in China, the researchers said in their 2017 report on Indian nuclear forces published this month.
The duo estimate plutonium production in India allows for the creation of 150 to 200 warheads. So far, they believe between 120 and 130 nukes have been completed.
And the nation’s ability to churn out nuclear materials is expected to rise dramatically. Kristensen and Norris say that New Delhi currently has four nuclear capable systems, among them land and sea based missile systems, and are developing at least four more, including long-range missiles.
“We may be witnessing what I call a ‘decoupling’ of Indian nuclear strategy between China and Pakistan,” MIT professor Vipin Narang said at the Carnegie International Nuclear Policy Conference in Washington in March.
“The force requirements India needs in order to credibly threaten assured retaliation against China may allow it, according to this scholar, to pursue more aggressive strategies—such as escalation dominance or a ‘splendid first strike’—against Pakistan,” Narang noted.
New Delhi will grow domestic nuclear production capacity at a remarkable clip in the coming years, Sputnik reported on Wednesday. The 10 new nuclear reactors slated to be installed will facilitate the commercial production of electricity for Indian residents, but for some analysts the military applications are obvious as well.