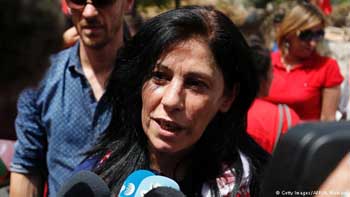 MP and campaigner Khalida Jarrar has been imprisoned over her links to a group that Israel considers a terrorist organization. Ten other Palestinian politicians are currently being detained under a controversial law.
Palestinian politician Khalida Jarrar was ordered to be detained for six months without trial by Israeli authorities, the prison support group Addameer said on Thursday.

The 54-year-old was arrested earlier this month because of her membership of the Popular Front for the Liberation of Palestine (PFLP), which Israel considers a terror organization. The PFLP is a left-leaning faction opposed to peace with the Jewish state.
At the time of her arrest, Israel’s internal security service said Jarrar had been “promoting terror activities,” without giving further details.
Jarrar was one of three PFLP members elected to the Palestinian Legislative Council (PLC) which ceased to function in 2006 after a split between Hamas and Fatah, the two political groups that now run separate parts of the Palestinian territories.
Samidoun, the Palestinian prisoners’ solidarity network, said she was one of 11 Palestinian MPs currently serving time without trial in Israeli jails.
Jarrar is a popular figure among Palestinians and is known for fiery speeches against Israel.
The longtime campaigner was previously jailed multiple times by Israel along with her activist husband Ghassan Jarrar, who himself spent a total of 11 years in Israeli prisons without charges being levied.
The MP had been released from a 14-month sentence in June 2016 after she was jailed for allegedly encouraging attacks against Israelis.
Israel says its controversial administrative detention policy is intended to prevent attacks and allow police to hold suspects while continuing to gather evidence.
But the scheme, which allows for six month detention periods to be renewed indefinitely, has come in for much criticism from human rights groups who say Israel use the orders routinely as a form of collective punishment of Palestinians.
The Palestinian news agency WAFA reported that Jarrar and fellow lawmaker Ibrahim Dahbour were among 50 Palestinians held recently under the detention orders.
Around 6,500 Palestinians are currently in Israel jails, including around 500 in administrative detention, according to the Palestinian Prisoners’ Club.
Palestinian prisoners have mounted repeated hunger strikes to protest their detention. In May, some 1,500 prisoners ended a 40-day hunger strike after a deal was reached to allow them more regular visitation rights and better healthcare.
mm/msh (AFP, WAFA)