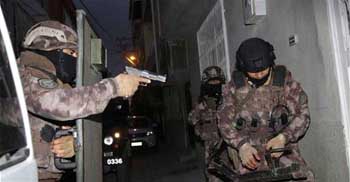 Police have detained five people with alleged links to Islamic State of Iraq and the Levant (ISIL) militants killed in an operation in the southern province of Adana.

Authorities launched efforts to apprehend 10 suspects who are believed to have links to the militants killed in a raid on an ISIL cell house in the Central Anatolian province of Konya on July 12.

Five militants were killed in the anti-ISIL operation in Konya’s Meram district after jihadists opened fire on police officers, which led to clashes that slightly wounded four police officers.

Adana police’s anti-terror branch determined that a group operating under the name “Meydan Grubu” may have links to the cell house in Konya.

Simultaneous raids were carried out early on July 13 with the support of special forces police.

Tight security measures were taken around the area, as police were on duty with long-barreled weapons and armored vehicles.

Several addresses were raided after their doors were broken down by the police. Detailed searches were carried out inside the houses and their gardens.

Meanwhile, the autopsies of the killed militants were completed, according to Konya Chief Public Prosecutor’s Office.

“Eight out of nine people sought were caught and efforts to apprehend the other one are continuing. The investigation is meticulously ongoing, with the evidence collected and seized,” the statement said.

The details of the raid are also continuing to surface, with police saying the weapons were found in the attic and no money was found in the searches.

In addition, it was revealed that the house rented 20 days ago by a militant, identified only by the initials A.Y., belonged to a businessman, identified only as M.Ö., who was detained as part of an investigation into the Fethullahist Terrorist Organization (FETÖ), Doğan News Agency reported.

M.Ö. was previously detained on suspicion of financing the group, widely believed to have masterminded the July 2016 failed coup attempt, but was released later on.

Elsewhere, three people reportedly planning to stage attacks were detained in the Şahinbey district of the southeastern province of Gaziantep late on July 12.

Police teams stopped a car with a Syrian number plate, which was followed by two out of three people in the car running away from the police. They were caught and detained after being chased.

Police later detained the suspect in the car, whose suicide vest with hand grenades and three Glock pistols were confiscated.

While the car was taken to a police parking lot for examinations, authorities are evaluating the possibility that one of the suspects were planning to carry out a suicide attack.

According to the authorities, the suspects, aged between 25 and 35, are of Syrian origin.