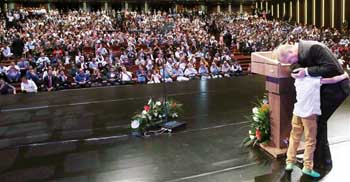 Nothing will be the same again after the July 15, 2016, coup attempt, Turkish President Recep Tayyip Erdoğan has said at an event marking the first anniversary of last year’s attempted takeover.

“There are important turning points in the histories of nations and states, which direct their future. July 15 is such a date for the Turkish nation and the Turkish Republic. From now on, nothing will be the same as it was before July 15,” Erdoğan said on July 13 at the presidential complex.

The event is a part of weeklong commemoration events set to mark the first anniversary of last year’s deadly coup attempt.

“After the attacks of terrorist organizations following July 15, we have seen that we will either die or exist,” he added.

Likening the historic importance of beating the coup attempt to the Battle of Gallipoli, which came before Independence War of the Turkish Republic in 1919, Erdoğan stressed the importance of building traditions and commemoration activities.

“What make a nation are such traditions and ceremonies that have been evolved from turning points in their history. Maybe we are not aware of that right now because we are living in it, but we are leaving a very important legacy to the future generations,” he added.

“What July 15 means to us as a country and as a nation will be understood better in the future,” he said, adding that the related festivities in the future will mark the “epic dimension.”

He added that the state’s efforts to create a historic legacy after July 15 will continue in the upcoming days as the government is planning to encourage “scientific researches, building monuments and commemoration programs.”

“We will continue to remember July 15 with more comprehensive programs in the future,” he said.

Erdoğan called on the country’s citizens to participate in a day-long democracy watch that is set to start in the early hours of July 16 and continue all day long until midnight.

“I invite all my citizens from 81 provinces of Turkey to the democracy watch at the designated areas in their cities and provinces as it was one year ago,” he said.

“It is important to repeat these democracy watches in the following years in order to remember July 15,” he said.