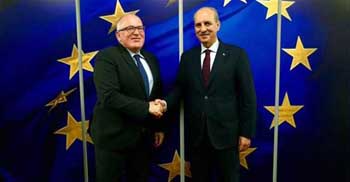 Europe is being tested on EU-Turkish ties due to its recent xenophobic and racist approach, Deputy Prime Minister Numan Kurtulmuş said on July 12.

Speaking during a visit to Turkey’s EU permanent representation in Brussels, Kurtulmuş said there had been some radical changes in the overall attitudes of European countries.

“Europe cannot maintain such racist, xenophobic, anti-immigrant, anti-Islamic, and anti-Turkish attitudes. Europe is being tested on EU-Turkish relations,” he said.

Stating that ties between Turkey and the EU have seen ups and downs, sometimes near the breaking point and sometimes at the brink of Turkish membership, Kurtulmuş said Ankara would sustain its relations with Europe “somehow.”

“In recent times we have been experiencing a number of additional problems that have not arisen from the institutional structure of the EU, which is a radical change in the general attitude and style of European politics.

“This is not only poisoning Turkish-EU relations, but also poisoning Europe’s future,” Kurtulmuş said.

During a visit to the Belgian Turkish Religious Foundation – the local branch of Turkey’s Religious Affairs Directorate – Kurtulmus said Turkey and the Turkish government “always stand by and support our citizens here [in Europe] and we are trying to fulfill all our responsibilities to deal with their troubles.”

“We are warning our European friends in every way. These growing xenophobia, anti-Islam, anti-migrant and anti-Turkish [attitudes] will not make the slightest contribution to the future of European politics. This is the wrong way, and this racism should not be allowed to poison Turkish-EU relations.”

Pointing to the 5 million-strong Turkish population in European countries, Kurtulmus said Turkish people in Europe can help the continent develop.

Turkey applied for membership in the European Economic Community -a precursor to the EU- in 1987. It became eligible for EU membership in 1997, and accession talks began in 2005.

According to diplomatic sources who asked not to be named due to restrictions on talking to the media, during the meetings the leaders discussed last year’s July 15 coup attempt in Turkey, the EU’s promise of visa-free Schengen zone travel for Turkish citizens, the Turkey-EU migrant readmission agreement, last week’s collapse in Cyprus peace talks, as well as growing racism,
xenophobia, and Islamophobia in Europe.