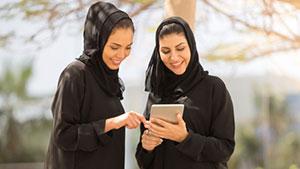 By Vivian Nereim
Saudi Arabia’s religious police are hiring people to study unveiled women and people who don’t pray.
Official tenders posted Thursday on the government procurement website advertised for contractors to carry out a field study on “uncovered women and women displaying their beauty.” A second study will address “the phenomenon of failure to pray,” according to the listing, which didn’t discuss the purposes of the studies.

Saudi Arabia enforces an austere interpretation of Islam, with businesses closing for prayer and women required to have male guardians and wear long cloaks called abayas in public. Religious police charged with enforcing these social rules patrol the streets urging men to pray and telling women to cover their hair and avoid colorful or decorated abayas.
A small but increasing number of Saudi women are forgoing the face veil or even uncovering their hair.
Officially called the Commission for the Promotion of Virtue and the Prevention of Vice, the religious police are trying to modernize and project a friendlier image as the country undergoes economic and social reforms. The commission also posted a tender in June seeking contractors to publish a “journal of scientific research.”