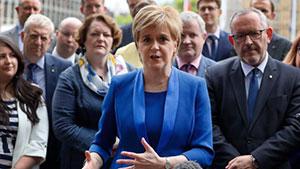 London: Wales and Scotland are threatening a Brexit rebellion after the British government revealed the key piece of legislation that will take back power from the European Union in two years’ time.

The government published on Thursday the text of the so-called “Great Repeal Bill”, a 66-page, highly technical law intended to surgically transplant EU rules and rights onto the British statute books, so they survive Brexit.

Its aim is to provide a seamless transition, to avoid “cliff-edge” legal uncertainty at the moment of Brexit, currently expected on March 29, 2019.

But the first ministers of Wales and Scotland dubbed it a “naked power-grab”, and said they would recommend that their devolved parliaments block the law in its current form.

The bill “represents the most significant attack on devolution since the creation of the [Welsh] National Assembly in 1999”, Wales first minister Carwyn Jones said.

“[It] is an attempt to take back control over devolved policies such as the environment, agriculture and fisheries not just from Brussels, but from Cardiff, Edinburgh and Belfast.”

In a joint statement by Jones and Scotland’s first minister Nicola Sturgeon, the two leaders said the bill was “an attack on the founding principles of devolution [that] could destabilise our economies”.

If the devolved parliaments of the two countries do not approve the bill, but the British parliament does, it would likely provoke a constitutional crisis and create new uncertainty that the bill was intended to prevent.

The bill will also face a rocky path through the British parliament, when it comes up for a vote in the northern autumn.

The minority Conservative government holds power through a hard-bought deal with the Northern Ireland DUP, and would be vulnerable to any defection.

The Liberal Democrat leader Tim Farron warned the government “you should be under no illusion, this will be hell” in getting the bill through parliament.

Labour’s shadow Brexit secretary Keir Starmer said his party would not pass the bill unless it was amended.

Labour is demanding concessions including a guarantee that workers’ rights do not fall behind the EU after Brexit.

“Nobody is seeking to frustrate the process; we are determined to ensure that the right approach is taken; and this is all about protecting the rights of citizens in Britain,” Starmer told The Guardian.

Brexit minister David Davies said the bill would allow Britain to leave the EU with “maximum certainty, continuity and control”.

“It is one of the most significant pieces of legislation that has ever passed through Parliament and is a major milestone in the process of our withdrawal from the European Union,” he said.

“By working together, in the national interest, we can ensure we have a fully functioning legal system on the day we leave the European Union.

“The eyes of the country are on us and I will work with anyone to achieve this goal and shape a new future for our country.”

The bill will likely face stiff opposition to several clauses that give ministers wide-ranging powers to modify European laws as they are translated into British law.

The clauses, granting what is known as “Henry VIII powers” to the government, last until two years after Brexit.

During that time ministers have power to alter any transposed EU law or regulation, without asking parliament, to change anything they regard as a “deficiency” or which fails “to operate effectively”.

With a few exceptions, parliament can only overrule the minister’s decision after the fact – the minister isn’t required to seek permission in advance.

The government’s lawyers believe these powers are necessary, in order to make thousands of minor changes to the imported EU law to make it work properly in the new British context.

Given the tight Brexit timetable, putting each modification to parliament would take too long.

The government argues this is already standard procedure with other secondary legislation.

However, Labour says it wants tighter curbs on ministerial powers to change the law, saying the bill would give the government leeway to make significant changes to the law without parliamentary scrutiny.

Before Brexit, the government intends to pass several other bills that will overrule areas of EU law, which would otherwise be preserved by the Repeal bill.

These include a new immigration law, to end the free movement of workers from the EU.

There will also be new laws covering trade, nuclear safety, international sanctions, fisheries and agriculture, which will depart from the EU’s rules.