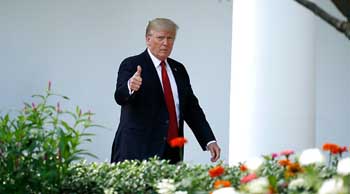 President Trump plans to invite Russia’s leader to the White House, but he doesn’t “think this is the right time,” he said, revealing what he will ask Putin next time they meet.
The question of who the Russian leader actually cheered for during the US presidential election campaign still riddles Donald Trump, as he told reporters abroad Air Force One while traveling to France to meet President Emanuel Macron.

“The next time I’m with Putin, I’m going to ask him: Who were you really for? Because I can’t believe that he would have been for me. Me. Strong military, strong borders – but he cares less about the borders – but strong military, tremendous,”Trump said, adding that Putin’s alleged support for him was doubtful since he was all for strong US economy and taking fossil fuels “all over [to] compete with Russia.”
The US president added, however, that he only wants to “make great deals with Russia.”
Trump has yet again strongly denied any alleged collusion with Russia, branding the “Trump-Russia” narrative a “media witch hunt,”which is “bad for the country.”
Trump also stated he would invite the Russian president to the White House, but the time did not seem right, he said, adding that saying it might not have won him any political points.
“I don’t think this is the right time, but the answer is yes, I would,”Trump said. “Let’s be the smart people not the stupid people. The easiest thing for me to tell you is that I would never invite him. We will never ever talk to Russia. That all of my friends in Congress will say, oh he’s so wonderful, he’s so wonderful. Folks, we have perhaps the second most powerful nuclear country in the world. If you don’t have dialogue, you have to be fools. Fools.”