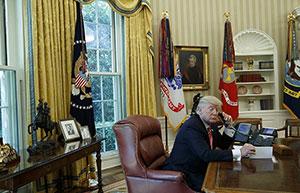 “I don’t think this is the right time,” Trump said when asked if he planned to invite the Russian leader to the White House, “but the answer is yes, I would.”

Trump confirmed that he and Putin discussed the pending congressional sanctions legislation at their last week’s meeting at the G20 summit.

“I would never take the sanctions off until something is worked out to our satisfaction and everybody’s satisfaction in Syria and in Ukraine,” Trump said. “I’ve made great deals. That’s what I do. Why would I take sanctions off without getting anything?” he added.

Putin and Trump held their first official talks on July 7 on the sidelines of the G20 summit in Hamburg. The talks lasted for more than two hours instead of 30 minutes as earlier scheduled. The Russian and US presidents discussed the settlement in Syria and Ukraine, the Korean Peninsula crisis and issues of ensuring security in cyber space.