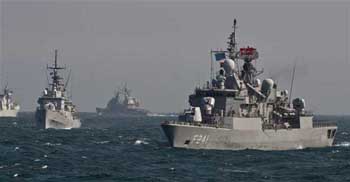 The Gökçeada frigate belonging to Turkey’s Naval Forces has begun patrolling the eastern Mediterranean Sea in a bid to watch the exploration activities of Greek Cyprus off the island, as Turkey vowed to retaliate against the Greek Cypriot government’s unilateral actions, a move that would likely spark fresh tension in the region.

It was learned the Gökçeada Frigate belonging to the Turkey’s Naval Forces began patrolling in the Eastern Mediterranean to follow the exploration works being conducted by the “West Capella”, drilling vessel contracted by France’s Total and Italy’s ENI.

The “West Capella” is a drilling vessel contracted by France’s Total and Italy’s ENI that started exploring for gas off Greek Cyprus on July 12.

“We cannot remain indifferent to these kinds of unilateral actions. At the moment, we are planning the steps we will take with our Energy Ministry,” Foreign Minister Mevlüt Çavuşoğlu said at a press conference on July 13, a week after the failure of U.N.-led talks to reunify the Turkish and Greek Cypriots under a new federal state.

Turkey says the natural richness of the island belongs to both the Turkish and Greek Cypriot communities. Plans to use them should be considered as part of a political settlement.

“The Turkish Republic of Northern Cyprus and the Turkish Cypriot people have rights on any reserves around the island. As a matter of fact, the Greek side does not deny this right in their statements but conducts these activities unilaterally,” said Çavuşoğlu.

Recalling that Greek Cyprus began exploration works while two communities and three guarantor countries were holding a conference to finalize two-year long negotiations for a unified state, Çavuşoğlu said this was simply an example of the insincerity displayed by the Greek Cypriots.

“Instead of focusing on a solution, they have launched an exploration in a bid to provoke these talks. It’s because of their insincerity that the 10-day long talks did not lead to any results,” he said.

One of the actions Turkey may take would be to start its own drilling works for an exploration well off the island.

The exploration well, “Onesiphoros West 1,” is estimated to be completed within 75 days, Greek Cyprus’s energy ministry said in a statement.

The two companies have licensing rights over the block, which lies about 6 km away from Zohr, a massive offshore Egyptian gas find made by ENI in 2015.

Last month, Greek Cyprus issued a Navtex advisory to inform shipping in the area that drilling work would run from July 10 until early October.

The drilling is expected to reach a maximum depth of around 4.25 km (2.6 miles) below mean sea level, or 1.6 km beneath the sea bed, the energy ministry said.