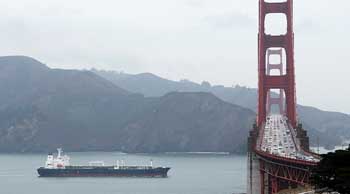 Exports of liquefied natural gas (LNG) from the United States are going to overtake those of Australia and Qatar, making the country the world’s largest supplier, according to the latest report by the International Energy Agency (IEA).
The agency says more than half of the natural gas produced in the US will be converted to LNG for export.

“The US shale revolution shows no sign of running out of steam and its effects are now amplified by a second revolution of rising LNG supplies,” said Fatih Birol, the IEA’s Executive Director.
The US is already ranked the number one global producer of natural gas with the country producing 890 billion cubic meters (bcm) by 2022, according to the agency. The figure represents more than a fifth of global gas output.
To increase export demand, the US is building three major LNG terminals on the Texas coast, doubling the number of US ports used at the moment.
According to the report, future demand for natural gas will be boosted by industry as its traditional use in power generation is being curbed by increased renewables and coal.
The agency adds that increased liquefaction capacity has created a glut, dragging global prices down to attract new participants of the market like Pakistan, Thailand, and Jordan.
The IEA warned of disruption to traditional supply routes, highlighting the current deadlock due to the isolation of the world’s biggest LNG exporter Qatar.
“Even in a well-supplied market, recent events remind us that gas security remains a critical issue,” Birol said.
The agency also says world demand for gas will increase by 1.6 percent annually for the next five years.
Consumption is expected to reach nearly 4,000 bcm by 2022 with China accounting for almost 40 percent of growth.
“The rising number of LNG consuming countries, from 15 in 2005 to 39 this year, shows that LNG attracts many new customers, especially in the emerging world,” Birol said.