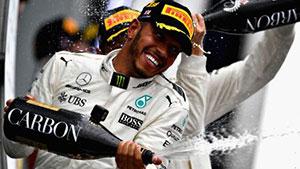 1 Lewis Hamilton (Gbr) Mercedes GP 1hrs 21min 27.430secs
2 Valtteri Bottas (Fin) Mercedes GP 1:21:41.493
3 Kimi Raikkonen (Fin) Ferrari 1:22:04.000
Race Report
Lewis Hamilton slashed the deficit to Sebastian Vettel at the summit of the Formula One championship after a crushing performance at Silverstone to win the British Grand Prix for a record-equalling fifth time.
Hamilton led every lap to the delight of his home crowd as he moved to within just one point of Vettel in the title race after the Ferrari driver suffered a puncture on the penultimate lap to finish in seventh.
His Ferrari team-mate Kimi Raikkonen was poised to finish second but he also suffered a puncture in the closing moments to promote Valtteri Bottas one spot as Mercedes completed a remarkable one-two finish.
Bottas started ninth but stormed back through the field, including a pass on Vettel with eight laps remaining to the delight of the partisan crowd.
Hamilton destroyed the field in qualifying and his race performance was equally emphatic as he recorded his fourth consecutive win on home turf.
He said: “It is never easy. The feeling I can’t describe. It is amazing to be out here and I am so proud to see all these flags everywhere.
“The support has been immense and I am really proud that I could do this for you all. The team has been faultless. Valtteri has done an exceptional job as well, so it has been the perfect weekend for us.”
Asked by podium interviewer and Hollywood actor Owen Wilson if he was going to win the championship, he replied: “That’s the plan, but there is a long way to go.”
The Englishman has now won the event five times to join Frenchman Alain Prost and Britain’s two-time champion Jim Clark as the masters of the British Grand Prix.
Hamilton, 32, faced a backlash for missing a promotional event in London earlier this week, preferring to take a two-day break on the Greek island of Mykonos with his friends instead.
But after such a crushing display Hamilton will feel as though his decision has been vindicated, with his victory here helping to get his stuttering championship charge firmly back on track.
Hamilton blasted out of his marks to leave a stream of red in his Mercedes mirrors with Raikkonen, Vettel and the fast-starting Max Verstappen jostling for position. Verstappen managed to get the jump on Vettel to demote the championship leader to fourth.
Behind the front-runners Daniil Kvyat is a man under pressure at Toro Rosso and he will have done little to ease the uncertainty surrounding his future after he punted his team-mate Carlos Sainz out of the race.
Kvyat put two wheels on to the dirt through the super-fast Becketts section, and with his car unhinged, he thudded into Sainz’s car. The damage sustained by Sainz was terminal, but Kvyat managed to get to the end of the race. He was given a drive-through penalty for his error however.
The collision on lap two led to the safety car being deployed to deal with the debris, and Sainz’s abandoned Toro Rosso. At the end of lap five the safety car was in, and Hamilton led the field away.
Hamilton was in cruise control but Verstappen was left fending off the challenge of Vettel for third. On lap 13, the two came within inches of a collision as Vettel attempted to pass Verstappen through Stowe and then Club, but the Dutchman held firm.
“He wants to play bumper cars,” Verstappen said over the team radio. Vettel wagged his hand at the teenager, but said nothing over the radio.
Seven laps later however Vettel got his man by virtue of pitting one lap later and leapfrogging the Red Bull.
Hamilton stopped for his one and only change of tyres at the end of lap 25 and left the pits in charge of the race. That looked to be that, before the race came to life in the closing moments.
First, Bottas stormed round the outside of Vettel on the Hangar Straight to move up to third. He quickly took second place as Raikkonen suffered a front-left puncture.
Vettel, also struggling with his tyres, suffered the same fate as his Ferrari team-mate on the penultimate lap. The crowd cheered Vettel’s demise as the German toured the 3.6-mile circuit with bits of rubber falling off his destroyed tyre.
Vettel made it to the pits for repairs but dropped to seventh to make Hamilton’s emphatic afternoon all that much sweeter. Raikkonen completed the podium with Verstappen fourth and his Red Bull team-mate Daniel Ricciardo fifth.
Fernando Alonso retired from the race following another Honda engine failure, while Britain’s Jolyon Palmer did not even start after his Renault expired on the parade lap.