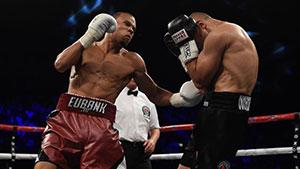 The champion showed his full array of punches, but was not able to deliver a knockout blow against the battle-hardened 37-year-old.
However the clear superiority across the judges scorecards, with two scoring it 118-110 and the other 120-108, gave Eubank the validation he needed heading into the inaugural World Boxing Super Series which also features the likes of George Groves, Callum Smith and Jamie Cox.
There had been little love lost between the two fighters in the build-up.
Eubank soon tested the Armenian-born German with a range of jabs in the opening round, before coming inside to land a strong uppercut straight through the middle of his guard.
Abraham, who had initially failed to make the limit at Friday’s weigh-in, continued to back off in the second round and at one stage was left static on the ropes by Eubank’s superior movement.
However, Abraham – a former IBF middleweight world champion and twice WBO super-middleweight title holder – showed plenty of heart as he soaked up Eubank’s armoury while also giving the Englishman plenty to think about with his own big left hand over the top.
Eubank had moved up from middleweight for his previous world title-winning fight against Renold Quinlan in February, but saw his pace drop as the fight reached the midway point.
The 27-year-old, with just one defeat to Billy Joe Saunders from his 25 professional bouts, stepped things up again in the seventh, but once more Abraham took the punishment on the ropes before moving back on the offensive.
Abraham was producing a resolute display and then rocked the champion in the 11th with a big left before again standing tall under a flurry of blows as the contest drew to a close.
Earlier on the undercard, Welshman Lee Selby delivered a successful third defence of his IBF world featherweight title with a unanimous decision points win over Argentinian Jonathan Barros, which secured a positive end to a difficult and emotional week following the death of his mother on Tuesday.
Selby, 30, was cut in the fifth but boxed superbly behind his jab, dropping Barros in the last round with a left hook before taking a 119-108, 117-110 and 117-110 decision on the scorecards.
Selby told ITV Box Office: “I told my team not to mention anything about my mother … I turned my phone off – there were emotions going through me before the fight.
“If I told anyone I would have been strapped up in a straitjacket. I got the win, and I dedicate it to my mother.”
Selby said at no stage did he consider pulling out of the bout, saying: “No. I’m a fighter and whatever happens I’ll still fight.”
The Welshman said he was not troubled by the cut he sustained.”Nothing in the ring fazes me. It’s a fight. You’re supposed to get cut, and I’ve got the best cuts man in the business, Chris Sanigar.”
There was a shock result when Poland’s Michal Syrowatka defeated Robbie Davies Jr to claim the WBA light-welterweight title.
The Liverpool fighter was cut in the sixth and then sent to the canvas in the final round when the towel came in from his corner. Davis Jr was taken to hospital following the fight as a precaution, but his manager later confirmed he was okay.
Elsewhere, British super-featherweight champion Martin Ward retained his title and added the vacant Commonwealth belt with a unanimous points wins over the previously unbeaten Belfast boxer Anthony Cacace.
Brentwood’s Ward edged a close decision 115-114, 116-114 and 116-113 to claim the Lonsdale belt outright.
Sheffield featherweight Kid Galahad took his record to 23-0 with a 10th-round stoppage of Mexican Jose Cayetano to claim the vacant IBF inter-continental title and put himself closer to a showdown with Selby.
Galahad was deducted a point in the fifth for a low blow, but it made litte difference as a right upper-cut followed by a left-right-left combination was enough for referee Marcus McDonnell to step in after 2:14 of the 10th.